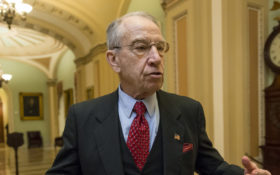 Senate Majority Leader Mitch McConnell predicted that Supreme Court nominee Kavanaugh would win approval, despite the new allegations and uncertainty about how pivotal Republicans would vote in a roll call now expected early next week.

Hoping the hearing will yield no new surprises, the Senate Judiciary Committee scheduled its own vote on Kavanaugh for Friday. Republican leader Chuck Grassley has pulled out all the stops and has laid plans that could keep the full Senate in session over the weekend and produce a final showdown roll call soon after — close to the Oct. 1 start of the high court’s new term.

The vote will take place only 24 hours after Kavanaugh and his accuser, Christine Blasey Ford appear for testimony to discuss sexual assault allegations made against Kavanaugh from 30+ years ago.

Committee rules state that a vote must be scheduled at least three days in advance. According to the committee, they will only proceed with the vote if a majority of the members” are ready to vote on Friday.

Despite McConnell’s forecast that Republicans will “win,” Kavanaugh’s fate remains uncertain in a chamber where Republicans have a scant 51-49 majority.

“I will be glued to the television,” said Sen. Susan Collins, a moderate Republican from Maine, who has yet to declare her position on confirmation.

Republicans are concerned that, win or lose, the battle over Kavanaugh’s nomination is further animating women already inclined to vote against Trump’s party in November’s elections in which control of the next Congress is at stake.

Treatment of Ford, 51, at Thursday’s testimony will be watched closely by many Americans.

“It’s very important to take allegations of those who come forward seriously, and I think we need to go into this hearing with the view that we will listen,” she said.

Grassley is planning to use his committee’s modest-sized hearing room instead of a far larger chamber that’s often home to high-profile hearings. He said in a recent letter that the smaller room would help avoid a “circus atmosphere,” and Ford herself has sought to limit the number of TV cameras and journalists covering the event.

With the new Supreme Court term beginning Oct. 1, McConnell has been lobbying GOP senators to vote for Kavanaugh.

According to one Republican, McConnell is “fired up” and has prepared his colleagues that he plans to keep the Senate in all weekend to have the final confirmation vote on Kavanaugh ready by next week.