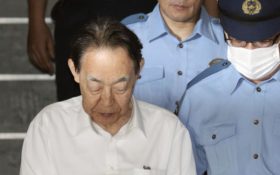 A Tokyo court sentenced a former senior government official to six years in prison on Monday for fatally stabbing his socially reclusive son with a kitchen knife.

The Tokyo District Court found Hideaki Kumazawa, 76, a former vice minister of agriculture, forestry and fisheries, guilty of repeatedly stabbing his son Eiichiro, then 44, in the neck and chest at his home in Tokyo in June. The son died from massive blood loss.

Kumazawa, who immediately called police and admitted to the killing, pleaded guilty to the crime during the trial.

In the closing court session on Friday, Kumazawa said, “It is my duty to pay for the crime and pray for my son so he can pave a peaceful time in his afterlife.”

His son had a developmental disorder and was routinely violent toward his mother. He was removed from his parents and lived alone in an apartment until he returned home a week before the killing. The court said in its ruling that the son resumed his violence as soon as he returned home and threatened to kill his father.

Defense lawyers had sought a suspended term, saying Kumazawa had long supported his son despite his violence toward his mother, and that Kumazawa killed him in self-defense after the son’s threat.

They also said that Kumazawa feared his son might harm others as in a case days earlier, when a man described a a social recluse — known in Japan as “hikikomori” — stabbed a number of schoolchildren at a bus stop outside Tokyo, killing two people and wounding 17 others, mostly schoolgirls, before killing himself.

Judge Tomoyuki Nakayama said the son’s body had more than 30 stab wounds, including some that were very deep, indicating that the killing was not purely self-defense.

Prosecutors sought an eight-year prison term. The court ruled that Kumazawa deserved a more lenient six years in prison, taking into consideration his effort to improve his family’s relations with the son, the violence inflicted by his son and the threat of being killed.

The case and the earlier attack in Kawasaki highlighted growing concerns about “hikikomori.” A government survey in March showed there are an estimated 610,000 “hikikomori” between the ages of 40 to 64 in Japan, mostly men, with many still taken care of by their elderly parents without proper support from the outside.