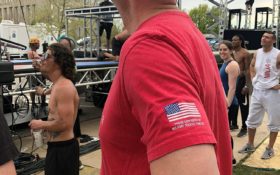 Organizers of the reality television show that features high-level athletes racing through grueling obstacles say the 47-year-old ex-CEO is the first governor to give the course a try.

Stitt bloodied his elbow completing a rope swing to a landing pad after jumping across a pool of water. A spokeswoman says he finished two of the three obstacles.

Filming for the show will continue Friday and Saturday night for the NBC program’s 11th season. Other stops this season include Los Angeles, Atlanta, Baltimore, Cincinnati and Seattle.

The show qualified for an Oklahoma program that offers a cash rebate of 35% for qualifying production expenditures.