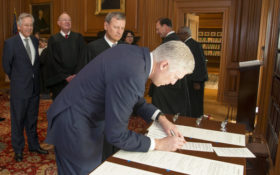 How do you keep a new Supreme Court justice’s head from getting too big?

Start by making him take notes and answer the door at the justices’ private meetings. Then, remind him he speaks last at those discussions. Finally, assign him the job of listening to gripes about the food at the court’s cafeteria.

That’s what awaits Neil Gorsuch, who joined the Supreme Court on Monday as the “junior justice,” the freshman of the nine-member court. The menial duties for the newest justice are a part of tradition, but not a bad deal for a job that comes with lifetime tenure and the prestige of a high court seat.

Still, it can take all the justices a while to adjust. Justice Samuel Alito says that when he took over as the court’s rookie from Justice Stephen Breyer in 2006, after Breyer had been the court’s junior member for more than a decade, Breyer still leapt up the first time someone interrupted the justices’ private conference with a knock.

“Before I could even start to get out of the chair, Justice Breyer was out of his chair and headed for the door and the chief justice had to say, ‘Steve, sit down, that’s not your job anymore,'” Alito said in a 2009 interview.

Gorsuch will take over junior justice duties from Justice Elena Kagan, who has held the spot since 2010. Kagan has said of her door-opening duties: “Literally, if there is a knock on the door and I don’t hear it there will not be a single other person who will move. They’ll just all stare at me until I figure out: ‘Oh, I guess somebody knocked on the door.'”

Kagan said at Princeton in 2014 that retrieving a justice’s forgotten pair of glasses or coffee from whomever is knocking sometimes conflicts with her other job at private meetings: taking notes.

Kagan has said other justices also liked to rib her about the food at the court since it’s the junior justice’s job to help oversee the cafeteria, which is frequented by court employees and visitors.

Chief Justice John Roberts has said that the appointment to the cafeteria committee has another function for a new justice.

“It’s a way of bringing them back down to Earth after the excitement of confirmation and appointment,” Roberts told an audience in 2011 following Kagan’s appointment.

Kagan said it worked and that it’s a way of telling the new justice: “You’re not so important after all … You have to spend an hour every month thinking about the chocolate chip cookies.”

For Gorsuch, cafeteria duty is likely the least of his worries. Kagan, who like Gorsuch clerked on the court, compared adjusting to being a justice to “drinking out of a firehose” and said the “learning curve is extremely steep, sometimes it seems vertical.”

Justice Byron White had a five-year rule, telling new justices that’s how long adjusting takes. Justice Clarence Thomas, who joined the court in 1991, said White told him: “Well, Clarence, in your first five years you wonder how you got here. After that you wonder how your colleagues got here.”