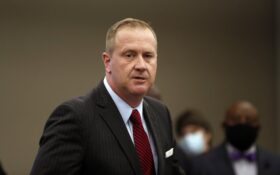 Schmitt is a strong contender with a record of winning statewide elections and who is backed by Missouri mega-donor Rex Sinquefield. In a written release, Schmitt pushed his conservative credentials and railed against “the radical left.”

Blunt’s March 8 decision not to run for another term opened the floodgates for ambitious Republicans interested in succeeding him. But the GOP field is narrowing. Early favorite Secretary of State Jay Ashcroft bowed out, as did Lt. Gov. Mike Kehoe.

Political scientists have speculated that Republicans are trying to unify around a single candidate to avoid a potentially damaging primary. Greitens’ candidacy complicates that.

Greitens, who has been laying the groundwork for a comeback for months if not years, is a polarizing figure unpopular with the state’s Republican establishment.

The former Navy SEAL officer was once seen as a rising star in Republican politics, possibly even a future presidential candidate.

Those aspirations seemed to vanish in 2018 when his extramarital affair was exposed. A felony charge accused him of taking a compromising photo of the woman as potential blackmail if she spoke of their encounters.

Greitens then faced a second criminal charge accusing him of using a donor list from his charity for his political campaign.

Greitens, who is now divorced but was married at the time, admitted to the affair but denied wrongdoing in both cases. Still, he resigned in June 2018 and the criminal cases were dismissed.

He maintains a core of support that could be enough to win a primary, but political observers have said the scandals that pushed him out of the governor’s mansion could thwart Republicans’ chances of keeping the U.S. Senate seat.

Schmitt in his announcement alluded to the threat of Republicans losing the Senate seat if Greitens wins the GOP nomination, saying Missouri needs “a leader who can hold this Senate seat in firm Republican hands without giving Democrats any chance to take this seat back.”

Voters first elected Schmitt to the state Senate in 2008 to represent a suburban St. Louis district. He was elected state treasurer in 2016, then took over as the state attorney general after Josh Hawley vacated the seat to join the U.S. Senate in 2019.

He won another term as attorney general in 2020.