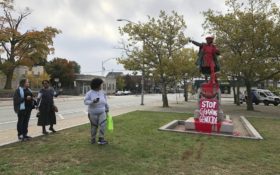 The people have spoken and—for once—Washington has listened.

Two Republican senators, who introduced a bill to replace Columbus Day with a federal holiday supported by Black Lives Matter (BLM), have withdrawn the amendment after harsh national backlash that included a nationally televised tongue-lashing from Tucker Carlson.

“Many were not happy with the proposal,” said Sen. Ron Johnson, R-Wis., in one of the bigger understatements of the year.

He and fellow Republican Sen. James Lankford, R-Okla., alienated many conservatives with their plan to eliminate a day honoring Christopher Columbus.

The wheels were first set in motion when Sen. John Cornyn, R-Tex., who’s up for re-election this year, introduced a bill to make Juneteeth a federal holiday.

“Juneteenth” is a contraction of “June 19th,” the day when Union General Gordon Granger announced that slaves in Texas were free. It wasn’t celebrated anywhere until 1980 — but it’s a major goal of Black Lives Matter.

Of course, the same protesters have vandalized the Lincoln Memorial and threatened to tear down a statue celebrating the Emancipation Proclamation — but Republicans still want to try to compromise with BLM. Cornyn introduced the bill, which won the support of liberal Democrats like possible Biden VP nominee Kamala Harris, former Democratic presidential hopeful Sen. Cory Booker from New Jersey, Ed Markey of Massachusetts, and some Republicans.

Cornyn hoped to fast-track his bill for a voice vote — where nobody would know how any Republican voted.

But Senators Johnson and Lankford decided to one-up him. They said Cornyn couldn’t add a BLM-backed holiday to the calendar unless he got rid of Columbus Day, too.

They dropped a “counterproposal” on the floor to adopt Juneteenth as one of 10 recognized federal holidays in place of Columbus Day. Johnson said he wanted to save the American people money, since each federal holiday costs U.S. taxpayers about $600 million a year. He said the two Republican senators “chose Columbus Day as a holiday” to get the axe, because it is “lightly celebrated, and least disruptive to Americans’ schedules.”

The holiday has already been replaced in some liberal areas. “I think it’s a great day for Colorado that we can say, ‘we no longer support a racist holiday,’” said Rep. Adrienne Benavidez, D-Commerce City.

Tucker Carlson responded in shock, saying, “Holy smokes, this is getting really crazy. What does Christopher Columbus have to do with George Floyd?”

Then the number-one rated talk show host in cable news took aim at Johnson and Lankford.

While rioters “rampage through America destroying our culture and history, it’s easier to give them what they want … unless of course, their voters notice them doing it.”

“What do you think they will do if you don’t say anything? Which other holidays will they be canceling?” he asked. “What else will they do if we don’t stop them?”

“It all depends that you let them know that you noticed they’re trying to cancel Columbus Day,” he said. “If you don’t say anything about it, there’s no telling what Johnson and Lankford might do next.”

Soon, the floodgates opened, as conservatives said the GOP should not be erasing Christopher Columbus from U.S. history.

“When will ‘Republicans’ understand that this won’t please the mob? Nothing will,” wrote Benny Johnson, who works for the conservative activist group Turning Point USA. “We need Republicans in office who will FIGHT.”

When will 'Republicans' understand that this won't please the mob, nothing will.

We need Republicans in office who will FIGHT. pic.twitter.com/v8zIRCzZvd

The calls to save Columbus Day were so loud that the Republican senators got the message. Last Friday night, on the eve of a holiday weekend, Johnson and Lankford quietly announced they had withdrawn their anti-Columbus Day amendment.

Johnson said he hadn’t targeted Columbus Day to curry favor with BLM and the PC crowds.

“I was in no way deprecating Christopher Columbus’ achievements or expressing any value judgment regarding his place in history,” Johnson said.

Just before the holiday celebrating America’s freedom, Tucker Carlson’s monologues — and your calls and e-mails — proved that the people still have a say in their own government.