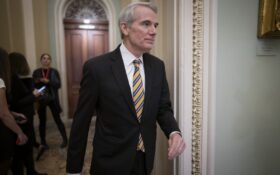 A report released Tuesday by Republican members of the Senate Committee on Homeland Security and Governmental Affairs contained bombshell information on Communist Chinese Party links to the Federal Reserve.

According to the Republican senators led by Sen. Rob Portman, R-O.H., the Communist Party of China has targeted officials in the U.S. Federal Reserve since at least 2013.

China has deliberately “used a variety of tactics to recruit U.S.-based economists to provide them with knowledge and intellectual capital in exchange for monetary gain and other benefits,” the report said.

The report details how many of these officials have managed to keep their positions at the Fed despite being identified as “persons of interest.”

“This investigation makes clear that China’s malign efforts at influence and information theft are not limited to science and technology fields — American economic and monetary policy is also being targeted by the Chinese government,” Portman said in a statement.

“The Chinese government makes no secret of wanting to be the world superpower,” the report said. “No sector or institution is off limits, and China has shown that it will use any means necessary to achieve its goals.”