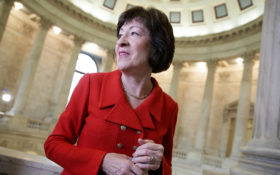 There’s an ugly new form of bullying in town as the left turns to a high-pressure big-money tactic to try to force a sitting United States Senator to vote the way they want.

Far-left activists have created a huge war chest of cash and have threatened to give it to Collins 2020 opponent – no matter who that opponent is – if she doesn’t vote against Supreme Court nominee Judge Brett Kavanaugh.

Here’s how it works: Liberals around the country are using a crowd-funding website to pledge a few bucks each.

If Collins votes against Kavanaugh, no one is ever charged and the campaign vanishes.

If she votes FOR him, however, all heck breaks lose: The donors’ credit cards are charged and that money – more than $1.2 million promised so far, and growing every day – will go to whoever runs against Collins.

Some call it vote-buying.

Sen. Susan Collins, the target of this ugly scheme, has another word for it.

“I consider this quid pro quo fundraising to be the equivalent of an attempt to bribe me to vote against Judge Kavanaugh,” she told Newsmax.

Collins has said she will not be influenced by the campaign.

“I think it demonstrates the new lows to which the judge’s opponents have stooped,” she told the website.

She also complained that she’s getting crude and nasty voicemails to her office, many from out of state. And, going by the people who have boasted online about their donations to the 2020 fund, many of those people are also from out of state.

In other words, these people aren’t just trying to buy her vote. They are trying to subvert the senator’s actual constituents – the citizens of Maine, who in 2014 gave her nearly 70 percent of the vote in a stunning mandate.

Yet the same leftists who complain about “big money” in politics think it’s OK to use more than $1 million to influence someone else’s senator.

The Wall Street Journal slammed the sham attempt at vote-buying as “embarrassing” and possibly worse.

“It isn’t clear this is even legal,” the newspaper wrote in an editorial, adding:

“We’re all for citizens exercising their free-speech rights, including campaign donations, for or against political candidates. But federal law defines the crime of bribery as ‘corruptly’ offering ‘anything of value’ to a public official, including a Member of Congress, with the intent to ‘influence any official act.’ The crowdfunders in this case are offering something of value—withholding funds from her opponent—in return for a Supreme Court confirmation vote.”

But he didn’t exactly give it an endorsement, either.

“You use your money to pay for your speech. You buy a full-page ad. You construct a website,” Napolitano said. “Here is using money to influence speech in an awful way, but it is not illegal.”

While it’s not illegal, he did call it “crude” and “weird.”

Then, he concluded with a warning for the left: This could come back to haunt them.

“‘If you don’t vote the way I want, I’ve got a million bucks for your as-yet unnamed and undetermined opponent,’” Napolitano said.

“So I think this is actually going to backfire politically.”