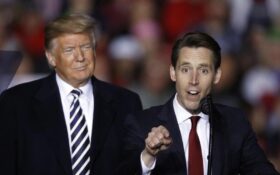 Sen. Josh Hawley, D-Mo., was asked Tuesday about some of the federal investigations into former President Donald Trump, a close ally. Hawley addressed the Justice Department’s raid into Trump’s home and House Jan. 6 Committee’s investigation probe into the Capitol riot — and he wasn’t happy.

Hawley slammed these agencies for abusing their power, and like the Jan. 6 Committee, he offered his own vision for democracy reform… starting with the imprisonment of some FBI officials.

“I haven’t watched a minute. I’m proud,” Hawley said Tuesday, referring to the Jan. 6 Committee’s televised hearings. “It’s state propaganda to cover for the fact and distract attention from the fact of what we’ve learned and have been learning, that the FBI deliberatively interfered in not one, but two separate presidential elections.”

Hawley accused the FBI of abusing its power, a common refrain for conservatives unhappy with the raid on Trump’s home.

“The idea that the FBI, who laundered the [Trump-Russia] dossier back in 2016 through the courts, lied… to extend their wiretaps that they never should have gotten in the first place, then in 2020 deliberately suppressed the Hunter Biden story! Remember the FBI had the Hunter Biden laptop [story] for a full year before the story broke. They had all the emails, knew it was true, and yet they put out there that it was Russian disinformation.”

Hawley, one of the tech industry’s most vocal critics, also slammed the FBI for becoming involved with Twitter. The senator grabbed headlines this week for moving to ban TikTok from federal devices; he included the TikTok ban as an amendment to the spending bill currently up for debate in the Senate.

“We see now with Twitter,” Hawley said. “They went after Twitter until Twitter agreed to censor it. That’s unbelievable stuff. There have got to be repercussions for that, or we’re not going to have a democracy.”

Then, Hawley demanded for heads to roll.

“Somebody should go to jail for it,” Hawley continued. “We’re going to have clearly a conversation about the future of the FBI and what it’s doing in our democracy, because that kind of power, the kind of power that they have is immense. And if they’re going to use it, then I have to say I think out Constitutional order is not secure.”

Hawley has faced criticism for abusing his own power to delay the certification of 2020’s election.

Take a look at this snippet from his press secretary —

.@HawleyMO: The FBI deliberately interfered not one, but two separate presidential elections… there have got to be repercussions for that.

We're going to have to have a conversation about the future of the FBI and what it's doing in our democracy. pic.twitter.com/I3WOcCC3XN