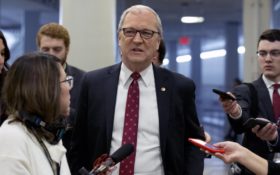 Cramer blamed autocorrect for the tweet, which he deleted soon after posting it Tuesday evening. The Republican senator was responding to a video clip on Twitter in which Pelosi, D-Calif., was being interviewed on the massive COVID-19 relief bill being negotiated in Congress.

Cramer said in an interview that he meant to type, “She’s ridiculous,” and didn’t notice what he actually tweeted until a few minutes later when he went to make another tweet.