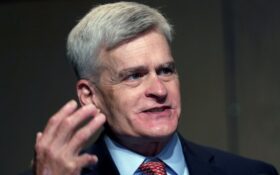 U.S. Sen. Bill Cassidy announced Thursday that he has tested positive for the coronavirus and is experiencing some COVID-19 symptoms. He said he is quarantining in Louisiana.

The Republican senator, 62, who is running for reelection on Nov. 3, is experiencing “mild symptoms that began this morning,” from COVID-19, the illness caused by the virus, his spokesperson Cole Avery said.

Cassidy, a physician from Baton Rouge who regularly wears a mask when in public, said in a statement that he was tested after being notified Wednesday night that he’d been exposed to someone infected with the virus. The senator said he is adhering to medical guidance and notifying people with whom he may have come into contact.

“I am strictly following the direction of our medical experts and strongly encourage others to do the same,” he said.

Cassidy’s announcement came a day after he was in north Louisiana, visiting a veterans hospital in Shreveport, where he posted a photo with an official from the facility.

The senator faces 14 opponents on the November ballot but is favored to win election to a second term in a deep red state where he has the backing of President Donald Trump and a $6 million campaign account. His highest-profile opponent is Shreveport Mayor Adrian Perkins, a Democrat.