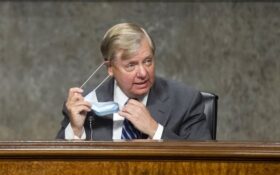 In the next step of a race already on pace to become the most expensive in South Carolina history, U.S. Sen. Lindsey Graham is taking on three little-known GOP challengers in Tuesday’s primary election, the last marker ahead of an expected general election face-off with Democrat Jaime Harrison.

Reynolds, a Merchant Marine engineer from Charleston, has said new leadership is needed in Washington. Graham is seeking his fourth term.

Graham’s popularity among Republicans in his home state has recently fluctuated along with his relationship to President Donald Trump, who is supporting his reelection bid and campaigned with him in the state in February. A year ago, all of South Carolina’s statewide-elected officials endorsed Graham, as has Vice President Mike Pence, who helped kick off Graham’s campaign last year.

The 44-year-old Harrison, an associate chairman with the Democratic National Committee and former chairman of the South Carolina Democratic Party, has from the start aimed to draw national attention. That has helped him to spur the fundraising and grassroots organizing that is crucial to flipping a Senate seat in the deeply red state.

Last spring, he received backing from the Democratic Senatorial Campaign Committee and has since gotten support from former Vice President Joe Biden, as well as other 2020 hopefuls including U.S. Sen. Kamala Harris and U.S. Sen. Cory Booker.

Over the course of the campaign, Harrison has raised nearly $15 million. Graham has taken in a total of $21 million, according to Federal Election Commission records.

Harrison is unopposed in Tuesday’s primary. Two Libertarians and one Constitution Party candidate have also filed to seek the seat.

The COVID-19 outbreak created some questions as to how Tuesday’s elections would be carried out. During one of their brief returns to the Statehouse, legislators passed a law allowing universal absentee voting because of the pandemic. A federal judge also temporarily removed a policy requiring that a witness sign an absentee voter’s ballot.