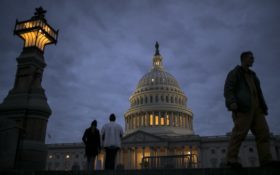 House Republican leaders have come out with a plan to keep the government open for six more weeks while Washington grapples with a potential follow-up budget pact and, perhaps, immigration legislation.

GOP leaders announced they would seek to pass the stopgap spending bill by marrying it with a full-year, $659 billion Pentagon spending bill that’s a top priority of the party’s legion of defense hawks.

The measure would keep the government running through March 23 and also reauthorize for funding for community health centers that enjoy widespread bipartisan support.

Pairing the Pentagon’s budget with only temporary money for the rest of the government wouldn’t go anywhere in the Senate, vowed Minority Leader Chuck Schumer, D-N.Y., who said it “would be barreling head first into a dead-end.”

On the other hand, the Senate might respond with a long-awaited spending pact to give whopping increases both to the Pentagon and domestic programs. Talks in the Senate on such a framework appeared to intensify in hopes of an agreement this week, aides and lawmakers said, and the House GOP strategy appeared designed in part to invite the Senate to complete budget negotiations and use the temporary spending bill to advance such a budget agreement.

Under Washington’s arcane ways, a broad-brush agreement to increase legally binding spending “caps” — which would otherwise keep the budgets for Pentagon and domestic agencies both essentially frozen — would be approved, then followed by a far more detailed catchall spending bill that would takes weeks to negotiate.

“We are making real headway in our negotiations over spending caps and other important issues,” said Senate Majority leader Mitch McConnell, R-Ky.

Republicans had been scrambling to pass the stopgap measure through the House because they can’t count on support from Democrats — who feel stymied by inaction on legislation to protect young immigrants from deportation — to advance the legislation.

The situation in both the House and Senate was murky, though it’s clear Senate Democrats have no appetite for sparking another government shutdown. Their unity splintered during last month’s three-day shutdown.

One especially tricky question is whether House Democrats would approve of a spending agreement if there isn’t much progress in addressing the issue of immigrants left vulnerable with the looming expiration of former President Barack Obama’s Deferred Action for Childhood Arrivals program. That’s a top priority for many House Democrats, especially lawmakers from the influential Hispanic Caucus.

House Minority Leader Nancy Pelosi, D-Calif., has linked progress on the budget with action to address the program but other Democrats are beginning to agitate for delinking the two, lest the opportunity for a budget pact be lost.

The broader budget picture is one in which GOP defense hawks are prevailing over the party’s depleted ranks of deficit hawks while Democrats leverage their influence to increase spending for domestic priorities such as combating opioid misuse.

The result could be the return of trillion-dollar deficits for the first time since former President Barack Obama’s first term.

Details are closely held and subject to change. But at issue is a two-year deal to increase caps on spending set by a failed 2011 budget deal. Republicans have pushed for defense increases in the neighborhood of $80 billion a year and have offered Democrats nearly as much — $60 billion or so per year — for nondefense programs.

Add in $80 billion to $90 billion worth of hurricane aid for Texas, Florida and Puerto Rico, health care funding and money for President Donald Trump’s border security plan, and the final tally could total close to $400 billion. The potential cost, over the 2018-19 budget years, would rival the deficit impact of last year’s tax measure over that period.

After last year’s tax bill, the Congressional Budget Office says the deficit for 2018 will hit about $700 billion — before any fresh increase. Next year’s deficit is already estimated to reach $975 billion, so the brewing agreement would mean the first $1 trillion-plus deficit since Obama’s first term.