Rosenstein to testify before Congress - The Horn News 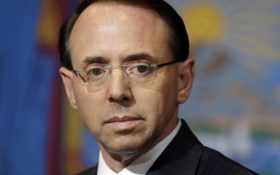 A person familiar with the situation says Rosenstein agreed to the meeting during a call Thursday evening with the House Judiciary Committee chairman, Rep. Bob Goodlatte.

Rep. Mark Meadows, chairman of the House Freedom Caucus, wrote on Twitter on Friday that Rosenstein will appear for a panel investigate to “explain his alleged comments on “wiring” POTUS–as well as other inconsistent statements.” He added, if Rosenstein fails to appear, he will be subpoenaed.

Leadership has agreed to call Rod Rosenstein before Congress, for a closed door hearing with our panel investigating, so he can explain his alleged comments on "wiring" POTUS–as well as other inconsistent statements.

If Mr. Rosenstein fails to show up, we will subpoena him.

Last week, a New York Times report cited Rosenstein as having secretly recorded Trump after he made the decision to fire former-FBI Director James Comey. The report also alleged he discussed Cabinet officials invoking the 25th Amendment to have the president removed from office.

The news of a “closed door” meeting with Rosenstein comes after Freedom Caucus leaders met with Goodlatte and Speaker Paul Ryan to discuss having Rosenstein testify under oath.

Several House conservatives have threatened to move forward with an impeachment of Rosenstein if he refuses to testify.

Ryan has suggested that Rosenstein’s fate will not be left in Congress’ hands — but rather Trump will be making the final call.

He told reporters on Wednesday, “We should let the president work it out with Rod Rosenstein.”

Trump and Rosenstein are scheduled to meet next week.