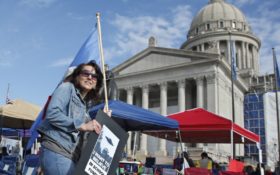 A top Republican lawmaker said Tuesday that the Oklahoma Legislature has no plans to bow to striking teachers’ demand to eliminate a capital gains tax break as a way to end a walkout now in its second week.

Rep. John Pfeiffer, a House majority floor leader, also said lawmakers are unlikely to consider any other major revenue bills this session. Gov. Mary Fallin also defied striking teachers on Tuesday, signing a bill to repeal a tax on hotel stays that teachers had called on her to veto. Fallin encouraged lawmakers to turn their attention to other issues.

The actions of the governor and Legislature appeared to indicate that the confrontation has reached a stalemate. The state’s largest teachers union has called for the walkout to continue until the Legislature comes up with more money for schools. Several districts have announced plans to close Wednesday for an eighth consecutive day.

Teachers descended on the Capitol again Tuesday, but the crowds were notably smaller. The House and Senate this week returned to more routine work, holding committee meetings and considering bills unrelated to revenue or education.

The Republican-led Legislature has approved tax increases on cigarettes, motor fuel and oil and gas production to generate about $450 million, with the bulk going to teacher raises. Pfeiffer said many House Republicans agreed to vote for the package only if the capital gains tax deduction remained.

“As far as this year, we’ve accomplished a whole lot, and I just don’t know how much more we can get done this session,” said Pfeiffer.

The Legislature approved $2.9 billion for public schools, an increase of nearly 20 percent over last year’s spending. Much of the new money was earmarked for teacher raises of about $6,100 on average. But teachers say the increase it not enough after a decade without raises.

Oklahoma is one of eight states that has some sort of preferred tax treatment of capital gains, among them Oklahoma neighbor Arkansas, according to Scott Drenkard of the Washington-based Tax Foundation, a nonpartisan think tank that promotes simple and transparent tax policies. Most states tax capital gains at the general income tax rate, he said.

Approved by Oklahoma voters in 2004, the capital gains deduction has become a target for teachers in large part because it benefits relatively few Oklahomans and would generate about $120 million annually. The deduction applies to gains from the sale of Oklahoma-based property, stocks and businesses, and was claimed on about 18,500 tax returns in 2014 for a total of $105 million, according to the Oklahoma Tax Commission.

An analyst hired by a state commission looking into Oklahoma’s variety of tax incentives for businesses and industries recommended last year that the deduction be eliminated.

“The incentive overall cannot, with the data available, be credibly shown to have significant economic impact or a positive return on investment for the state,” the analyst wrote.

Still, it is strongly supported by groups such as chambers of commerce, realtors and agricultural producers.

“Eliminating the state capital gains tax deduction could threaten many of our state’s family farms and ranches by forcing them to pay an additional tax on the sale of property they’ve worked hard for,” said Oklahoma Farm Bureau President Rodd Moesel.