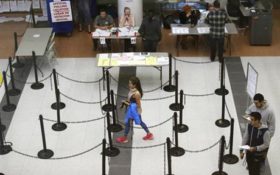 As President Donald Trump hurls unfounded allegations of colossal fraud in last fall’s election, lawmakers in at least 20 states are pushing to make it harder to register or to vote.

Most of those states are led by Republicans. Efforts are underway in states such as Arkansas, Iowa, Maine and Nebraska to adopt or tighten requirements that voters show photo ID at the polls. There is a move in Iowa and New Hampshire to eliminate Election Day registration. And Texas could shorten the early voting window.

Proponents say these changes are intended to prevent voter fraud and give voters confidence in the integrity of elections. But critics say that in-person voter fraud is extremely rare and that these measures will hurt poor people, minorities, students and the elderly.