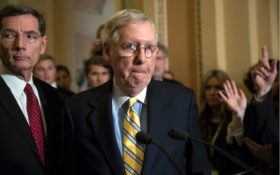 The career politicians in Washington, D.C. promised voters again and again they had a plan to “repeal and replace” ObamaCare if they were re-elected.

Now that they’ve been sent back to Congress, they’re unable to agree on anything — and critics say the establishment’s infighting has former President Barack Obama pleased as punch.

The Republican Party’s long-promised repeal of the Affordable Care Act is again stuck in limbo after Senate GOP leaders, short of support, abruptly shelved a vote on legislation to fulfill the promise.

The surprise development leaves the legislation’s fate uncertain while raising new doubts about whether Republican congressmen and women will ever make good on their many promises to erase Obama’s signature legislative achievement.

Senate Republican leader Mitch McConnell announced the delay Tuesday after it became clear the votes weren’t there to advance the legislation past key procedural hurdles. President Donald Trump immediately ordered Senate Republicans to the White House, but the message he delivered to them before reporters were ushered out of the room was not entirely hopeful.

“This will be great if we get it done, and if we don’t get it done it’s just going to be something that we’re not going to like, and that’s OK and I understand that very well,” he told the senators, who surrounded him at tables arranged in a giant square in the East Room. Most wore grim expressions.

In the private meeting that followed, said Sen. Marco Rubio of Florida, the president chewed out the establishment politicians on “the costs of failure, what it would mean to not get it done — the view that we would wind up in a situation where the markets will collapse and Republicans will be blamed for it and then potentially have to fight off an effort to expand to single payer at some point.”

The bill has many critics and few outspoken fans on Capitol Hill, and prospects for changing that are uncertain. McConnell promised to revisit the legislation after Congress’ July 4 recess.

“It’s a big complicated subject, we’ve got a lot discussions going on, and we’re still optimistic we’re going to get there,” the Kentucky lawmaker said.

But insiders say infighting among the representatives has gotten worse.

Or, in Texas Sen. John Cornyn of Texas words: “Every time you get one bullfrog in the wheelbarrow, another one jumps out.”

McConnell can lose only two senators from his 52-member caucus and still pass the bill, with Vice President Mike Pence to cast a tie-breaking vote. Democrats are opposed, and have repeatedly promised to fight everything put in front of them during Trump’s administration.

The House went through its own struggles with its version of the bill, pulling it from the floor short of votes before reviving it and narrowly passing it in May. So it’s quite possible that the Senate Republicans can rise from this week’s setback.

But McConnell is finding it difficult to satisfy demands from his diverse caucus. Conservatives like Rand Paul of Kentucky and Mike Lee of Utah argue that the legislation doesn’t go far enough in repealing Obamacare. But others, like Heller and Susan Collins of Maine, criticize the bill as not fair to some of their constitutes.

McConnell told senators he wanted them to agree to a final version of the bill before the end of this week so they could seek a new analysis by the budget office. He said that would give lawmakers time to finish when they return to the Capitol for a three-week stretch in July before Congress’ long summer break.