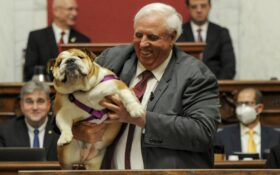 The 70-year-old Republican governor ended his televised State of the State address Thursday night by lifting up his English bulldog and flashing its rear end to the cameras and crowd.

“Babydog tells Bette Midler and all those out there: Kiss her heinie,” Justice said, grinning as people applauded and some gave him a standing ovation.

In the last decade, Midler has become known for her outspoken rants against Republican priorities and former President Donald Trump. She has tweeted favorably about the #Resistance against Trump, and she once called for women embrace abstinence as an act of protest against the Texas Heartbeat Act, a ban on abortions after approximately six weeks.

Now, Midler has turned her rage toward Manchin.

“What #JoeManchin, who represents a population smaller than Brooklyn, has done to the rest of America, who wants to move forward, not backward, like his state, is horrible,” Midler tweeted.

“He sold us out. He wants us all to be just like his state, West Virginia.”

What #JoeManchin, who represents a population smaller than Brooklyn, has done to the rest of America, who wants to move forward, not backward, like his state, is horrible. He sold us out. He wants us all to be just like his state, West Virginia. Poor, illiterate and strung out.

Manchin, a Democrat, effectively tanked his party’s signature $2 trillion domestic policy initiative that would have poured billions of dollars into child care, health care, and other services.

Manchin has faced the ire of some radical Democrats due to his skepticism of big spending. White House Press Secretary Jen Psaki berated him in a press release last year.

However, Manchin has earned enormous respect among some members of the general public.

Manchin ranked second, only behind Biden, in a recent poll about the Democrats’ next presidential primary. He ranked ahead of Vermont Sen. Bernie Sanders, former State Secretary Hillary Clinton, and sitting Vice President Kamala Harris.

According to one focus group of swing voters, Manchin would receive more swing votes as an independent candidate than either Joe Biden or Donald Trump.

Bette Midler, however, would probably not be a fan of a Manchin candidacy, if her outburst is any indication.

Not everyone was amused by Justice’s dog. In a tweet, West Virginia Democratic Del. Shawn Fluharty called the governor’s move “embarrassing and beneath the office.”

“The @WVGovernor brought his Babydog and pony show to the State of the State and pulled this stunt as some bold statement. It was nothing short of embarrassing and beneath the office,” he said.

“Jim Justice habitually lowers the bar of our state. They don’t laugh with us, but at us.”

Before showing his dog, Justice spent more than an hour of the speech touting the state’s accomplishments, including two recently announced economic development projects.

“Absolutely too many people doubted us,” Justice said. “They never believed in West Virginia… They told every bad joke in the world about us.”

Midler hit back later. She said the dog’s heinie would make a better governor… although she used a stronger word than that.

She included a ranking of states with West Virginia near the bottom in education, health care, and the economy. She did not include the source of this ranking.

After receiving backlash, Midler apologized “to the good people of WVA” for her “outburst” in follow-up tweet later that day.

On Friday, The Associated Press requested comment from Midler’s publicist via email, but the agency received no response.

BTW, here are the state rankings of all the areas and agencies for which the so-called “Governor” of WVA, #JimJustice, is responsible. Judging from these rankings, I’d say his dog’s ass would make a better Governor than him! pic.twitter.com/TJAB3oj5VV

I apologize to the good people of WVA for my last outburst. I’m just seeing red; #JoeManchin and his whole family are a criminal enterprise. Is he really the best WV has to offer its own citizens? Surely there’s someone there who has the state’s interests at heart, not his own!

Under the karmic principles that govern dictators, excessive force generates greater resistance. 24 hours after his declaration of war on American citizens, there are more protestors in Lafayette Square who are defying the D.C. curfew than before Trump

I suggest that all women refuse to have sex with men until they are guaranteed the right to choose by Congress.