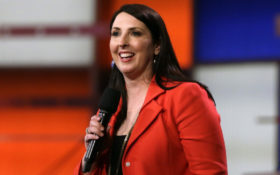 The Republican Party has gone on a massive spending spree on luxury items, including jets, limousines, and booze galore.

This didn’t take place in the U.S. Capitol, this time. It happened in the Republican Party headquarters.

But the website didn’t just take the report at face value: “In addition to a review of Federal Elections Commission (FEC) data, RedState spoke with current vendors, state party officials familiar with the workings, former staffers,” including some from current RNC Chair Ronna Romney McDaniel’s tenure, “and several current RNC members to verify numbers and dates.”

The GOP spent $30,000 in donors’ funds to rent a private box at a Las Vegas Raiders game for RNC staffers.

In 2021 and 2022, the party hosted retreats for staffers at the exclusive Salamander Resort & Spa in Virginia, a staffer told RedState. All told, the RNC shelled out $260,000 to the resort for rentals, travel, and catering.

Staffers got custom, luxury jackets that set the Republican Party’s donors back $12,000.

That’s not even the half of it.

While the GOP is going down to defeat, its staffers and party brass are living like jet flyin’, limousine ridin’, booze-swillin’ sons of guns.

That’s a big difference from when Karl Rove reportedly had Republican events catered from Chick-fil-A. But that’s chicken feed compared to the new RNC. Under Mitt Romney’s niece, the RNC spent $100,000 on high-end designer clothing stores like Nordstrom’s and REI.

Over four years, it appears that the RNC staff spent half-a-million dollars on candles, office furniture, pottery, and other knick-knacks that stuff their palatial offices.

That’s not exactly what donors expected when they answer a desperate appeal to help the Republican Party beat back the liberal barbarians in the elections.

The report keeps tabs on the high-living ways of McDaniel, who’s seeking yet another term as leader of the RNC, despite less than stellar results in recent elections.

After Mark Levin read the story, he said simply, “She needs to go. … She needs to be removed.”

“After three lackluster election cycles, you’d think someone at the Republican National Committee would have the sense of accountability to step away,” wrote Matt Vespa at Townhall.com. But he predicted nothing will change, “because he gravy from this train is just too sweet.”

Their critics say it would be different if they had been successful.

The “bigger issue is hundreds of millions blown on consultants who fail. No one cares about floral excess if you are winning elections,” said Harmeet Dhillon on Twitter.

Thank you @IngrahamAngle for having me tonight to discuss reporting by @jenvanlaar on how the RNC spends precious donor dollars. Bigger issue is hundreds of millions blown on consultants who fail. No one cares about floral excess if you are winning elections. Time for change! 🕰️ pic.twitter.com/hEEVt6LYu5

But Dhillion’s involvement is controversial. Dhillon is running against McDaniel for chair of the RNC, and Jennifer Van Laar has endorsed Dhillon and once paid Dhillon to act as her lawyer.

“A client of Harmeet Dhillon decided to publish a hit piece in the middle of the night without making a serious attempt to engage with the RNC or Chairwoman McDaniel’s team,” responded McDaniel’s spokesperson, Emma Vaughn. “This blog post is as blatantly false as the lies she has been spreading that RNC members are being bribed for their votes.”

She didn’t explain what was false or who got bribed.

She also said all the expenditures “only adds up to 0.8% of the total amount the Chairwoman raised.”

But it’s more than the DNC spent—and when a Republican outspends a Democrat, it’s time to start tightening the belt…or righting the ship.