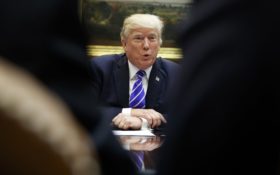 President Donald Trump and congressional Republicans are proposing a $5 trillion plan Wednesday, and it proves he’s heard his supporters woes.

The plan is meant to benefit hardworking middle-income Americans, and proposes cuts for those in the highest income bracket.

The plan would cut taxes for corporations and potentially for individuals, simplify the tax system and nearly double the standard deduction used by most Americans.

“Too many in our country are shut out of the dynamism of the U.S. economy, which has led to the justifiable feeling that the system is rigged against hardworking Americans,” says the blueprint, obtained by The Associated Press. “With significant and meaningful tax reform and relief, we will create a fairer system that levels the playing field and extends economic opportunities to American workers, small businesses and middle-income families.”

The plan is sweeping in scope but omits critical, controversial details that are likely to take months to work out in a bitterly divided, GOP-led Congress.

The political stakes are high for Republicans and for Trump, whose agenda has largely stalled as the GOP abandoned efforts to repeal the Obama-era health law.

Republicans see tax overhaul as a once-in-a-generation opportunity that could produce a large political payoff.

There are no details on how much it would cost, though back-of-the-envelope estimates by outside experts put the tax cuts in the range of $5 trillion over the next 10 years. The net cost to the federal debt would be far less — probably in the range of $1.5 trillion under deal put together by Senate Budget Committee Republicans — and the real battles will come as lawmakers quarrel over which tax breaks might be eliminated to help pay the balance.

The plan would collapse the number of personal tax brackets from seven to three.

The individual tax rates would be 12 percent, 25 percent and 35 percent — and the plan recommends a surcharge for the very wealthy. But it doesn’t set the income levels at which the rates would apply, so it’s unclear just how much of a tax change there might be for a typical family, and whether its taxes would be reduced.

“This is our once-in-a-generation opportunity to fundamentally rethink our tax code. We can unleash the economy — promoting growth, attracting jobs, and improving American competitiveness in the global market,” said Senate Majority Leader Mitch McConnell, R-Ky.

The plan would nearly double the standard deduction to $12,000 for individuals and $24,000 for families. This basically would increase the amount of personal income that is tax-free.

Deductions for mortgage interest and charitable giving would remain, but the plan seeks to end most other itemized deductions that can reduce how much affluent families pay.

But a battle is already brewing among Republicans over a move to eliminate the deduction for state and local taxes, which is especially valuable to people in high-tax states such as New York, New Jersey and California. Republicans from those states are vowing to fight it.

The plan would retain existing tax benefits for college and retirement savings such as 401(k) contribution plans.

It would seek to help families by calling for an increased child tax credit and opening it to families with higher incomes. The credit currently is $1,000 per child.

Also proposed is a new tax credit of $500 to help pay for the care of the elderly and the sick who are claimed as dependents by the taxpayer.

Corporations would see their top tax rate cut from 35 percent to 20 percent. For a period of five years, companies could further reduce how much they pay by immediately writing off their investments.