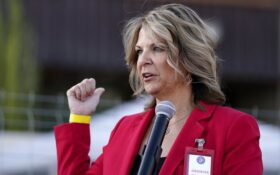 Two candidates for the Arizona Republican Party’s executive committee who lost their January elections are suing state party Chair Kelli Ward to force an audit of the results.

The lawsuit filed Friday in Maricopa County Superior Court by William Beard and Sandra Dowling also names the state party. It seeks a court order requiring an audit of the results.

Beard and Dowling’s lawsuit said there were concerns about ballot security and overall confusion after the vote at the Jan. 23 state party elections. Dowling was initially declared a winner of one of the at-large executive committee posts before it was announced that she actually had lost.

The lawsuit comes as Ward’s own narrow reelection victory for a second term running the state party has been questioned by a losing candidate and after a large group of GOP state lawmakers sent her a letter demanding that she allow an audit.

Ward and other Republicans have questioned President Joe Biden’s November victory in the state. The February letter from the lawmakers pointed out that Ward was leading that charge and that it appeared hypocritical for her not to back an audit of the party leadership election.

Ward has refused to allow an audit even though questions immediately arose after she squeaked out a victory and held her post. She said in a Jan. 28 video that there was no mechanism for a recount or an audit.

Ward didn’t immediately respond to a request for comment Friday.

Jack Wilenchik, the attorney for the state party, said Ward does not have the power to order an audit and that the suit “was primarily filed for publicity.”

He said an audit requires a vote of state committee members and any request needed to be made immediately after the vote.