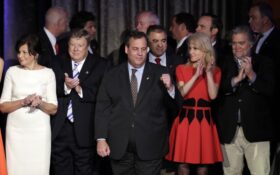 2024 may seem like a distant year — but the presidential race is already beginning to take shape right now.

But in the background, darkhorse figures are starting to position themselves to run for the GOP nominee.

On Wednesday, reports surfaced that 2016 presidential candidate and ex-New Jersey Gov. Chris Christie is considering another shot at the White House.

According to Axios, friends of Christie believe he’s seriously considering the move.

In addition to revealing in a podcast interview that he’s not ruling out 2024, he has reportedly told those close to him that if Trump decides not to run, he’d be the only candidate so far who has executive experience.

It’s worth noting that Christie once worked on Trump’s White House transition team in 2016.

Axios writer Jonathan Swan sees Christie’s confidence in his experience as a shot toward current Florida Gov. Ron DeSantis, who has received a surge of popularity amid the COVID-19 global pandemic.

A recent poll reported by Newsweek noted that DeSantis and Sen. Ted Cruz, R-Texas, lead the way in GOP polling aside from Trump.

So it seems as though Christie would have his work cut out for him should he run.

The Axios report shed light on crucial details: He’s no longer in the public eye due to his prolonged absence from public office — but he has been amplifying his voice over the airwaves as of late, recently calling out President Joe Biden for lying during a public appearance on “The Week.”

He even accused Biden of sowing racial division in the country.

Grumblings from the Christie camp arrive just as Trump recently spoke to Fox News’ Sean Hannity about returning for a 2024 run.

“Beyond seriously,” Trump said, when asked his level of consideration on a run.