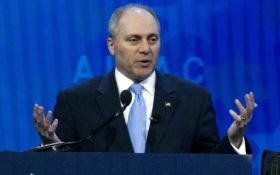 The coach of the Republican baseball team says he personally asked President Donald Trump to attend the annual game on Thursday, the anniversary of the shooting rampage that wounded the third-ranking GOP leader and others.

The annual game between Republicans and Democrats, which dates to 1909, carries great emotional weight this year in the wake of the attack against House Majority Whip Steve Scalise, R-La., and other lawmakers. Scalise sustained life-threatening injuries but returned to work last fall.

Williams said Scalise was expected to start at second base on Thursday at Nationals Park.

Also planning to be at the game, Williams said, were members of Trump’s Cabinet and other special guests.

The president has been publicly supportive of Scalise, the Capitol Police officers who were wounded and other first responders. At the State of the Union speech in January, Trump cited Scalise, who was shot in the hip and faced a grueling recovery.

Trump called him “one of the toughest people ever to serve in this House, a guy who took a bullet, almost died, and was back to work three-and-a-half months later, the legend from Louisiana, Congressman Steve Scalise.”