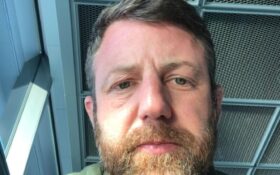 Rumor has it that he’s in Afghanistan.

On Monday, Mullin reportedly called the U.S. embassy in Tajikistan, two U.S. officials told The Washington Post. Mullin reportedly requested their help in moving a large sum of cash into the country. It was reportedly part of a plan to travel to nearby Afghanistan and rescue an American family. He, along with a mother and her four children, planned to hire a helicopter, the Post reported.

Mullin explained his plan to fly from Tblisi, Georgia to Dushanbe, Tajikistan, and he expected to approach the embassy within only a few hours, according to the two officials, who requested to remain anonymous.

The U.S. embassy reportedly denied Mullin’s request due to Tajikistan’s laws on cash limits and the U.S. state department’s travel warning on Afghanistan.

Mullin became outraged, the officials said — and he may have ignored the embassy and gone off on his own.

A federal spokesperson said the U.S. currently remains unsure of his whereabouts.

Unlike the other two congressmen, Mullin is not a veteran — but he’s a former Mixed Martial Artist fighter.

“To say this is extremely dangerous is a massive understatement,” said an anonymous official with the State Department in an interview with the Post.

The White House has previously urged Americans to avoid Afghanistan.

After the story of Mullins broke, a representative from his office released a public statement. She said that the congressman “has been and currently is completely safe.” She offered no further comment, and she did not divulge his whereabouts.

On Wednesday Mullin broke his silence by posting a cryptic selfie on Instagram. He mentioned “heading home” without mentioning his location.

I am heading home…

Have we been helping get Americans out of Afghanistan, yes. Is the mission continuing, yes. Am I missing, no. Did I go dark for a little, yes because it wasn’t safe to be communicating. Am I extremely disappointed in how we (United States) left Americans behind… that would be an understatement. President Biden and his administration are absolutely lying to the American people about Americans and our friends being left behind.

So many great Americans, many who are Veterans and many who are not, are stepping up to keep our promise….. We will never leave an American behind. #mullinfamily #usakeepsourpromise #godblessamerica #loveourcountry???????? #Ordinarypeopledoingextraordinarythings

Mullin also requested permission to travel to Afghanistan last week. He reportedly called the Department of Defense from Greece, and a Pentagon administrator said that the department denied Mullin’s request.

On Capitol Hill, Mullin’s reputation precedes him. He has become known for leading workout classes and used to be a professional Mixed Martial Arts fighter.

After he became injured he sought a career in plumbing — and, later, a career in politics. He is also known as one of the four Native Americans in Congress, as a card-carrying member of the Cherokee Nation.