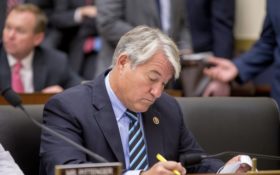 “I never viewed this amazing opportunity as a job or a career,” said Ross, who served in the state Legislature before winning election in 2010 to a congressional district in central Florida that strongly leans Republican.

“We will do what it takes to make that happen,” said Stivers, R-Ohio.

But Amanda Sherman, a spokeswoman for the Democratic Congressional Campaign Committee, said Ross had “nothing to run on” going into the general election and that votes for the tax cut bill that passed last year were problematic.

“It is clear that Rep. Ross saw the writing on the wall,” Sherman said.