Even Trump's supporters confused by this endorsement - The Horn News 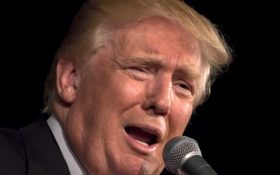 Former President Donald Trump has been a kingmaker throughout this year’s Republican primaries, with his endorsement securing the nomination of almost all his preferred candidates. He’s even made some surprising choices, like backing the author J. D. Vance for U.S. Senate in Ohio.

On Monday, though, Trump baffled even his closest-watching supporters by issuing an endorsement of “Eric” in Missouri… but not clarifying which Eric he’s endorsed.

Sen. Roy Blunt, R-Mo., is retiring next year at the end of his term, and the GOP has been running a messy primary in an attempt to replace him.

For most of the Republican primary, three Republicans were polling within only a few points of each other.

In fact, each of the three Republican frontrunners — U.S. Rep. Vicky Hartzler, former Gov. Eric Greitens, and state Attorney General Eric Schmitt — has taken the lead at some point during the primary, according to the poll average from RealClearPolitics. One MSNBC analyst described the primary election as a three-way race.

In other words, two of the three frontrunners are named Eric.

Trump endorsed “ERIC” on Monday… without providing a last name.

The former president wrote in a statement through his Save America PAC:

There is a BIG Election in the Great State of Missouri, and we must send a MAGA Champion and True Warrior to the U.S. Senate, someone who will fight for Border Security, Election Integrity, our Military and Great Veterans, together with having a powerful toughness on Crime and the Border.

We need a person who will not back down to the Radical Left Lunatics who are destroying our Country. I trust the Great People of Missouri, on this one, to make up their own minds, much as they did when they gave me landslide victories in the 2016 and 2020 Elections, and I am therefore proud to announce that ERIC has my Complete and Total Endorsement.

Both former Gov. Eric Greitens and Attorney General Eric Schmitt claimed the endorsement. Meanwhile, Rep. Vicky Hartzler became the subject of an internet joke about changing her name to Eric.

🚨ENDORSEMENT—PRESIDENT TRUMP🚨I’m grateful for President Trump’s endorsement. As the only America First candidate who has actually fought for election integrity, border security & against the Left’s indoctrination of our kids—I’ll take that fight to the Senate to SAVE AMERICA!

Trump’s PAC has so far declined to elaborate on the ambiguous endorsement. They simply told NBC News, “[The] endorsement speaks for itself.”

According to a report from Politico, Trump may have intentionally issued a double endorsement.

The former president reportedly heard arguments for several different candidates, but he remained undecided between the attorney general and the former governor.

“Trump circled back to the idea of endorsing the two Erics, reasoning that there were pluses and minuses to both, and that by doing so it would provide to each the opportunity to win with his support,” the website reported, after speaking to at least two insiders.

Trump reportedly called Schmitt on the phone after making up his mind. “You’ll be happy,” the former president told the attorney general, according to two insiders’ remarks to Politico.

According to Politico, Trump later made a similar call to the Greitens, without mentioning his earlier call to Schmitt.

Trump heard his inner circle’s enthusiasm for the former governor, according to Politico, but he stopped short of a full endorsement. He reportedly voiced concerns about the former governor’s many scandals, including a fresh accusation of domestic violence.

Double endorsements are not without precedent.

In 2020, the editorial board of The New York Times endorsed both Sen. Elizabeth Warren of Massachusetts and Sen. Amy Klobuchar of Minnesota for president at the same time. The paper faced mockery from both sides, and it became the butt of a joke by Elizabeth Warren herself.

Trump may have made a double endorsement by backing “ERIC.”

It only means that Trump has ruled out Rep. Vicky Hartzler.

“You can forget about Vicky Hartzler for Senate from the Great State of Missouri,” Trump said last month on Truth Social. “I don’t think she has what it takes to take on the Radical Left Democrats, together with their partner in the destruction of our Country, the Fake News Media and, of course, the deceptive & foolish RINOs. I was very nice to Vicky on the call, but I will NOT BE ENDORSING HER FOR THE SENATE!”

Meanwhile, Hartzler has been advertising her endorsement from Missouri’s other Republican senator, Josh Hawley.

The Republican nominee will emerge after Missouri’s primary on Tuesday, and the winner will advance to November’s general election against the Democrat.

On the Democratic side, Marine veteran Lucas Kunce is running against a nurse named Trudy Busch Valentine, the heiress to the Budweiser beer fortune.

“She’s not the weak Bush family,” Trump has allegedly said of the beer heiress, referring to his rivalry with the family of former presidents.