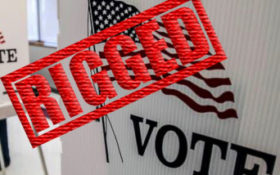 A new bombshell report has proven that President Donald Trump was right — and it’s good news to all patriotic Americans.

As it turns out, there were potentially over one million illegal aliens and ineligible citizens registered to vote in American elections all over the United States in 2016 — and they’re being removed from the voter rolls.

Back in January, Judicial Watch filed a lawsuit against the State of California and County of Los Angeles amid evidence that potentially millions of people were allowed to illegally vote in American elections.

After fighting it out for several months in court, California caved and agreed to Judicial Watch’s terms to avoid being further embarrassed in court.

In a press release from Judicial Watch, the group explains that they reached a deal with the far-left state to remove around 1.5 million inactive and potentially illegally registered names from its voter rolls.

“Judicial Watch announced today that it signed a settlement agreement with the State of California and County of Los Angeles under which they will begin the process of removing from their voter registration rolls as many as 1.5 million inactive registered names that may be invalid,” Judicial Watch stated in its announcement.

“These removals are required by the National Voter Registration Act (NVRA). The NVRA is a federal law requiring the removal of inactive registrations from the voter rolls after two general federal elections (encompassing from 2 to 4 years),” the group added.

The conservative watchdog group – who is responsible for uncovering former Secretary of State Hillary Clinton’s private email server in 2016 – went on to reveal that one country alone has more people registered to vote than 41 states in the U.S.

“Inactive voter registrations belong, for the most part, to voters who have moved to another county or state or have passed away. Los Angeles County has over 10 million residents, more than the populations of 41 of the 50 United States. California is America’s largest state, with almost 40 million residents,” the statement concluded.

This is a very serious issue that affects the entire nation – not just California.

American voters could lose the ability to hold a free election if voter fraud isn’t reversed, and it’s not just in liberal states where this is taking place.

Texas, one of the reddest states in America, could soon become a swing state thanks, in part, to rampant voter fraud and illegal voting.

And Democrats are doing absolutely nothing about it.

These cases in California and Texas alone prove Trump’s point when he said that millions of people – who had no legal right to vote in America – cast a ballot in the 2016 presidential election.

Democrats are obsessed with preventing Russia from interfering in America’s elections – even though former Special Counsel Robert Mueller said they didn’t cast or change a single vote in the 2016 election.

Yet they refuse to lift a finger to help Trump and Republicans ensure that illegals are not voting in elections for a country they have no legal right to be in.

The media scoffed and smeared Trump when he said millions of illegal voters voted in the 2016 presidential election — and now we have concrete proof of this in Texas and California.

Not only could Democrats have tipped elections by doing nothing about this, they may have already done it.

But at least in California, that’s a little harder now.