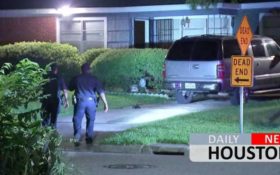 Holding a gun to his pregnant wife, two men attempted to break into on a couple’s home Tuesday night — but they didn’t expect the husband to be armed inside.

Police say the gunmen approached a Houston man’s pregnant wife in the driveway of their home and stole her purse before forcing her at gunpoint to go inside.

The husband heard his wife scream and hurried to grab his pistol. As they approached the door, he shot one of two would-be home intruders in the head, leaving him in critical condition.

According to police, the men were holding the woman at gunpoint and the husband confronted the men outside as they tried to push and drag his wife into the house.

The husband and suspects exchanged gunfire and one of the suspects was shot in the head. The 22-year-old suspect is hospitalized in serious condition.

The second suspect fled, while shooting gunfire at the husband, and unfortunately he has not been found.

The husband and his wife were not hurt.