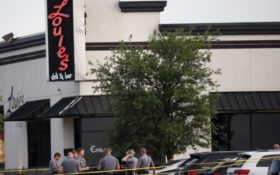 A man armed with a pistol walked into an Oklahoma City restaurant at the dinner hour and opened fire on the crowd, leaving at least four people wounded.

Thanksfully, a good guy with a gun was on the scene — and only the shooter was left dead.

The gunman opened fire around 6:30 p.m. Thursday at Louie’s On The Lake, a restaurant on Lake Hefner. The unidentified shooter walked into the restaurant and opened fire, only to be shot dead by a handgun-carrying civilian in the parking lot, police said.

Lake Hefner shooting update: A man walked into the Louie’s restaurant and opened fire with a gun. Two people were shot. One person has been taken to a hospital with serious injuries. A bystander with a pistol confronted the shooter outside the restaurant and fatally shot him.

⚠️ ALERT: The only confirmed fatality is the suspect. He was apparently shot-to-death by an armed citizen. Three citizens were injured, two of whom were shot. A large number of witnesses are detained. There is no indication of terrorismat this point.

The shooter, police reported, was “shot-to-death by an armed citizen” and they have indicated there was not act of “terrorism at this point.”

A family member told KOCO-TV that her daughter and 12-year-old granddaughter were shot while entering the restaurant for the girl’s birthday dinner. Authorities have not identified the injured patrons.

Correction: Two people taken to the hospital. The victims are expected to survive.

Both women were undergoing surgery for gunshot wounds but apparently “are expected to survive,” said Capt. Bo Matthews, a police spokesman. A man suffered a broken arm while trying to escape the shooting.

The dead suspect’s identity also was not immediately known, but it has been confirmed that the suspect is the only confirmed fatality. Authorities have yet to reveal whether the gunman had a motive or knew the victims.

The investigation at the scene was expected to extend into the early morning hours as law enforcement personnel interview about 100 eyewitnesses, he said.