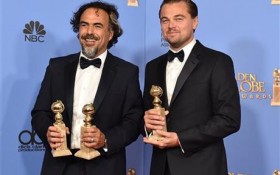 Alejandro Inarritu’s “The Revenant” won awards in the drama category for best picture and best actor for star Leonardo DiCaprio, who seems to be on a path to an Oscar for his portrayal of the 1820s fur trapper Hugh Glass.

Inarritu, whose “Birdman” swept the Oscars last year, also beat out “The Martian’s” Ridley Scott for the best director award. “The Martian” did win best comedy film and best actor in a comedy for star Matt Damon. The dubious placement of “The Martian” in the comedy category was a running joke throughout the evening — even Scott questioned it as he walked on stage to accept the best picture award.

But a win is a win, and although this awards season is far from predetermined, neither “The Martian” nor “The Revenant” were considered real frontrunners, especially against nominees like “Spotlight,” ”Carol,” ”Mad Max: Fury Road,” and “The Big Short.”

“Spotlight,” the fact-based drama about The Boston Globe’s investigation into sex abuses in the Catholic Church has been the one favorite throughout the season in both critics and guild awards. While it is considered a lock for a Best Picture nomination on Thursday, the film apparently did not win the favor of the Hollywood Foreign Press Association and received no awards on Sunday.

But all will come into focus on Thursday when Oscar nominees are announced. Voting for Oscar nominations closed on Friday, but the campaigning won’t end until the actual ceremony on Feb. 28. Any added momentum helps, even if Gervais joked at the start of the show that the award is “a bit of metal that some confused old journalist wanted to give you to meet you in person and take a selfie.”

Gervais’ snark aside, the Golden Globes have worked for years to shed an image of eccentric selections made by a group of little-known international journalists. The Globes have instead grown into one of the most popular award show broadcasts of the year, thanks to increasingly credible nominees, its trademark relaxed atmosphere and its unique position as a major awards show that honors both film and television.

Despite some outliers in the nominee ranks, the film acting awards went to a more expected lot. Jennifer Lawrence won best actress in a comedy for “Joy,” her third Golden Globe win for a David O. Russell film, who she thanked effusively in her speech. She also beat out her friend Amy Schumer in the category.

“She’s gonna be fine,” Lawrence said backstage. “She’s funny and hilarious and will win many things.”

In what is probably the year’s most competitive category, best actress in a drama, Brie Larson won out over Cate Blanchett (“Carol”) and Saoirse Ronan (“Brooklyn) for her affecting performance as a woman in captivity in “Room.” Last year’s winner Julianne Moore (“Still Alice”) went on to win the Oscar as well.

Awards race dark horse “Steve Jobs” also got some love on Sunday with wins for Kate Winslet, for best supporting actress, and Aaron Sorkin, for the screenplay.

Sylvester Stallone knocked out some heavyweight competition, too, in the supporting actor category with a win for “Creed,” beating out Idris Elba (“Beasts of No Nation”), Michael Shannon (“99 Homes”), Mark Rylance (“Bridge of Spies”), and Paul Dano (“Love & Mercy”). The crowd greeted his win with a standing ovation.

“I want to thank my imaginary friend Rocky Balboa for being the best friend I ever had,” said Stallone, whose only other Golden Globes nod was also for portraying the Italian Stallion in “Rocky.”

Despite some diversity in the nominee ranks, the film acting awards were still won exclusively by Caucasians, rousing some worry that the Oscars may follow suit despite increased scrutiny after last year’s #OscarsSoWhite criticisms.

Best foreign language film went to Hungary’s Laszlo Nemes’ “Son of Saul,” a harrowing view of life inside Auschwitz, and best animated film went to Pixar’s acclaimed “Inside Out.”

The Gervais-led Globes evidenced little of the seriousness that marks most award shows, or the teary-eyed acceptance speeches. Instead, the Globes had a particularly unraveled atmosphere that included Jonah Hill dressed as the bear from “The Revenant,” copious discussion of “Transparent” star Jeffrey Tambor’s male anatomy by Gervais, and much buzzing about Sean Penn’s escapade with Mexican drug kingpin Joaquin “El Chapo” Guzman.

Cecil B. DeMille lifetime achievement honoree Denzel Washington also fumbled his way through his speech, which generally serves as a poignant respite in an otherwise irreverent evening.

And yet, buoyed by more respectable picks in recent years and a three-year hosting stint by Tina Fey and Amy Poehler, the boozy Globes have been on the rise, even if their choices won’t directly affect who will get that coveted Oscar nomination. In Hollywood, though, it’s all about the buzz, and “The Martian” and “The Revenant” just leapt back into the spotlight.