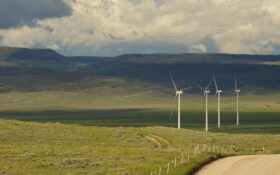 The rush to build wind farms to combat climate change is colliding with preservation of one of the U.S. West’s most spectacular predators — the golden eagle — as the species teeters on the edge of decline.

Ground zero in the conflict is Wyoming, a stronghold for golden eagles that soar on 7-foot (2-meter) wings and a favored location for wind farms. As wind turbines proliferate, scientists say deaths from collisions could drive down golden eagle numbers considered stable at best.

Yet a changing climate looms as a potentially greater threat: Rising temperatures are projected to reduce golden eagle breeding ranges by more than 40% later this century, according to a National Audubon Society analysis.

That leaves golden eagles doubly vulnerable — to the shifting climate and to the wind energy promoted as a solution to that warming world.

“We have some of the best golden eagle populations in Wyoming, but it doesn’t mean the population is not at risk,” said Bryan Bedrosian, conservation director at the Teton Raptor Center in Wilson, Wyoming. “As we increase wind development across the U.S., that risk is increasing.”

Turbines blades hundreds of feet long are among myriad threats to golden eagles, which are routinely shot, poisoned by lead, hit by vehicles and electrocuted on power lines.

The tenuous position of golden eagles contrasts with the conservation success of their avian cousins, bald eagles, whose numbers have quadrupled since 2009. There are an estimated 346,000 bald eagles in the U.S., versus about 40,000 golden eagles, which need much larger areas to survive and are more inclined to have trouble with humans.

Federal officials have tried to curb turbine deaths, while avoiding any slowdown in the growth of wind power as an alternative to carbon-emitting fossil fuels — a key piece of President Joe Biden’s climate agenda.

In April, a Florida-based power company pleaded guilty in federal court in Wyoming to criminal violations of wildlife protection laws after its wind turbines killed more than 100 golden eagles in eight states. It was the third conviction of a major wind company for killing eagles in a decade.

Despite the deaths, scientists like Bedrosian say more turbines are needed to fight climate change. He and colleague Charles Preston are finding ways wind companies can reduce or offset eagle deaths, such as building in areas less frequented by the birds, improving habitat elsewhere or retrofitting power poles to make them less perilous when eagles land.

“It’s robbing Peter to pay Paul, but it’s a start and I think it’s the way to go,” Preston said. “It’s a societal question: Is there room for them and us? It’s not just golden eagles. They are kind of a window into the bigger picture.”