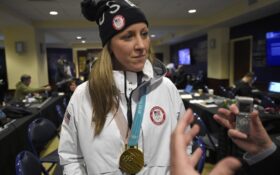 Meghan Duggan, the 2018 Olympic gold medal-winning hockey captain, retired Tuesday after a career in which she was at the forefront of the U.S. women’s players boycott over wages and equitable support that led to a new contract and a brighter spotlight on the sport.

Duggan’s resume includes that title in Pyeongchang in her final international tournament and seven consecutive world championship gold medals, a first by any American men’s or women’s player, plus with two silver medals at the Olympics and one at worlds.

She recorded 75 points (45 goals and 30 assists) in 137 games in a U.S. uniform and helped transform the culture after a gut-wrenching overtime loss to archrival Canada in the gold-medal game at the 2014 Sochi Games.

“I think that span from 2014 to 2018 was probably the most crucial years for our program,” longtime teammate and friend Kacey Bellamy said. “Meghan had such a hand in the way she led our team and the change in culture that we had to do in order to be successful, and that’s one of the main reasons why we won gold in 2018.”

Duggan’s legacy off the ice will be defined by something she did a year earlier when players threatened to boycott the 2017 world championships on home ice over compensation, especially in non-Olympic years. She helped spearhead negotiations with USA Hockey and was a spokeswoman for the team while they were ongoing before a four-year deal was reached.

In the middle of those talks, Duggan spoke up among the leadership group and said she would call every single player on the national team to explain the situation and spent all day on the phone with players and parents because she felt it was her duty as captain.

“Our team was not going to be able to be replaced,” Monique Lamoureux-Morando said. “When I think of that time frame and that pivotal moment and we were in the thick of it and she did that, when you think of a captain on your team and a leader on your team, you want someone that’s willing to do things that no one else is willing to do.”

Canadian defender Renata Fast, who had Duggan as an assistant coach at Clarkson University and played against her at the Olympics, called the 33-year-old “someone who is pushing the game forward.”

“She was always willing to fight for more for everyone,” Fast said. “She fights for our sport the way she fought on the ice to win a game. She was just so competitive in everything she did, and she always had a great head on her shoulder that knew the direction of where our sport needed to go. And I think she did a great job using her brand and using her voice to put the sport out there and really gain traction for it.”

With Duggan wearing the captain’s “C” the U.S. won the worlds in the aftermath of their contract dispute victory. Then, she turned her attention to the Olympic gold medal that had eluded the U.S. since 1998.

At an event in the fall of 2017 at Nike’s campus in Beaverton, Oregon, Duggan took copious notes when Hockey Hall of Famer and ’98 gold medal-winner Cammi Granato was addressing the team. Duggan and Granato had countless conversations that year about getting a more equitable contract and trying to win at the Olympics.

“Good leaders want to get information from everybody,” Granato said. “The gist of it was, ‘How do we win this gold medal?’ Like, ‘We are not going to this Olympic and coming away without a gold — how do we do it?’”

Duggan took her experiences from falling short in 2010 and 2014 and had two assists to get the U.S. back in the Olympic final, where it defeated Canada in a shootout. After remembering the pain of four years earlier, Kendall Coyne Schofield was thrilled Duggan got to the mountaintop of women’s hockey with that win.

“I’m so happy she was able to get her gold medal and go out on top,” Coyne Schofield said. “Not many athletes get to end their career on top.”

Duggan’s playing career may be over, but her influence off the ice isn’t. She was a founding member of the Professional Women’s Hockey Players Association in 2019 and with the aim of establishing one viable, sustainable pro league and could continue playing a crucial role in fighting for even more prominence for the sport.

“She continues to be a powerful voice for what we’re trying to do,” said Hockey Hall of Famer Jayna Hefford, who played against Duggan with Canada and now works as an executive with the PWHPA. “I know that she’ll continue to be a part of that, obviously not as a player, but I think in other ways. We’re lucky to have her as a voice.”

“It goes just to her work ethic on the ice — hardest worker I know,” said Brianna Decker, who played with Duggan in college, the CWHL, NWHL and on the national team. “She always led by example on the ice but off the ice, too, every little detail of the game, every little detail off the ice, she did it to a ‘T’ and she worked her butt off at it, and that was why we had a great example setter.”

Because of her accomplishments from the boardroom to the locker room and on the ice, Duggan will likely soon be a part of at least the U.S. Hockey and International Ice Hockey Federation Halls of Fame. She won’t have to wait long.

“Whatever the criteria is for the the waiting period, she’ll be there,” Coyne Schofield said.