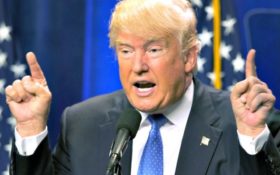 Trump’s use of Twitter to circumvent the media and talk directly to the American people is the modern day equivalent to Franklin Roosevelt’s “fireside chats,” observers say.

It cuts straight through the media’s bias by delivering the message, without liberal spin, straight into American’s homes.

And the president just used this new bully pulpit to set the record straight on former FBI Director James Comey.

If you’re a Democrat, be warned: This video is embarrassing for Trump’s critics.

But it has his supporters cheering — and average Americans are sharing the video so fast, it’s spreading across the internet faster than wildfire.

The Democrats should be ashamed. This is a disgrace!#DrainTheSwamp pic.twitter.com/UfbKEECm2V

Indeed, Democrats should be ashamed.

Trump’s firing of Comey has revealed the nasty hypocrisy of the left — and it has liberals unsure WHAT to do next.

Here’s a hint: wake up and think for yourselves!