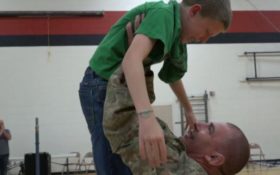 A middle schooler got the surprise of a lifetime last week when he thought he was attending a pep rally at his school — and what happened quickly went viral.

Administrators at Gooding Middle School put together a fake pep rally and homecoming as their cover story… but unbeknownst to sixth grader David Beach, it was all to fool him.

After a 10-month-long deployment to Texas and then Iraq, U.S. Army 1st Class Motor Sgt. Kenneth Beach was returning home — and this father had one goal in mind: to surprise his son.

Before his big return, Sgt. Beach contacted his son’s middle school and asked, “So I was just kind of like, ‘Hey is there a home game coming up, or is there an assembly you’re doing all together?'”

Originally, the school had nothing planned. But they quickly put together the fake pep rally and got students to fill the gym.

After Beach’s son, David, entered the gym, Principal Janet Williamson announced, that there was a special guest from the military in attendance.

“So David Beach would you come here? I would like to introduce to you, Sergeant First Class Kenny Beach who’s returning home from Iraq after 9 months of deployment,” she said.

David told KMVT 11, “As soon as I heard ‘from the Army,’ I immediately knew it was for my dad.” He added, “I’m super excited and I can’t wait to have fun with my dad again, go fishing, and go to a whole bunch of places.”

The news outlet also reported that the father-son duo’s first adventure back together was to get sushi, and then were going fishing with family friends.

Soldier back from deployment surprises son at Idaho ‘pep rally’