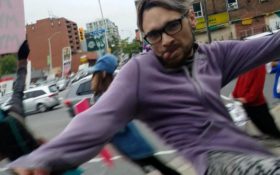 A video of a man who was caught violently kicking a peaceful pro-life activist earlier this week has gone viral, with millions of people sharing the vicious assault on social media.

After the video was released, the alleged attacker Jordan Hunt was fired from his job at a hair salon in Toronto, Canada. He also deleted all of his accounts on social media as he began facing backlash.

This same man was also reportedly caught on video earlier this summer attacking another female pro-life activist who was holding a peaceful demonstration in Toronto.

In the video, Hunt is seen approaching a group of pro-life activists and mocking one female activist.

He then suddenly allegedly kicks the woman and knocks her to the ground and could be heard yelling, “I meant to kick your phone,” while others could be heard shouting, “Someone call the cops!”

The victim in the incident, Marie-Claire Bissonnette told the Toronto Sun, “He kicked me in the shoulder, my phone went flying. I start shouting for someone to call police and before he runs away, he goes up to me and I had a ribbon on my jacket indicating the leader, he tore it off my chest.”

An investigation into the assault is still ongoing and no arrests have been made, but Bissonnette has indicated that she does plan to press charges against the culprit.

After the video went viral on social media, employees of the Canadian Centre for Bio-Ethical Reform noticed that Hunt had looked familiar. After doing some research, they say they were able to identify him as the same culprit who attacked a young female intern at their workplace earlier this summer.

The intern was holding a peaceful pro-life demonstration in Toronto when Hunt approached the woman and assaulted her for expressing her opinions in public.

The assault was also caught on video —

Witnesses have confirmed Hunt’s identity and the police have been notified of both of his suspected assaults.

Following the incident, Hunt’s company posted a message on Instagram to confirm he was fired from his job.

They wrote, “We don’t condone his actions and he has been let go. We believe that everyone has a right to an opinion and the right to voice their opinion without fear of physical violence.”