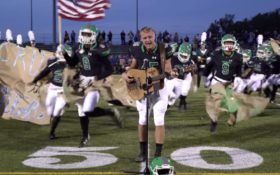 A high school senior from Maryland went viral last week after posting a video of his moving performance of the national anthem prior to his football game.

In the viral video, Jackson Dean Nicholson, with his guitar in hand, stood in center of the football field and sand his heart out for a rendition of “The Star Spangled Banner.”

The moving performance ended with Dean’s friends taking the field and running past the defensive end carrying an American flag in hand to kick of the start of the game.

The performance showcasing Dean’s talent and patriotism landed him an appearance on Fox News on Saturday.

“I’m an American, and I’m proud of my country,” Nicholson, who performs under the name Jackson Dean, said Saturday on “Fox & Friends Weekend.”

Nicholson has been posting videos on YouTube for years, and even has plans to take his guitar and talent on the road once he graduates high school in January.

“This is my last year, then I’m done. I’ve got until January, I’ll have all my credits done, and I only have to be enrolled for this semester. I got a waive by my principal and she’s very supportive of what I do,” he told The Washington Post. “I’m going to go for it.”

Growing up in Maryland, Nicholson has had a passion for music for years. He has even sung live in Baltimore and Nashville.

During his appearance on “Fox & Friends Weekend”, Nicholson stated, “We’ve got some things in the pocket that have been working that I can’t really talk about,” he said.

Jack Walsh, Nicholson’s high school football coach said the singer has a lot of support behind him.

“There’s life after football and a lot of our guys are starting to realize that as the season winds down,” Walsh said. “We’re all supportive of him taking the next step towards his future and his goals.”

As of Monday morning, Nicholson’s video had reached over 224,000 views.

You can watch his moving performance here —