Gobbled!? A Thanksgiving warning for Americans - The Horn News 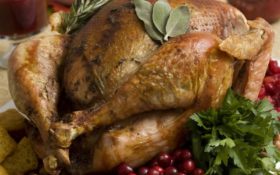 Americans have more reason than any other people in the world to give thanks. Unfortunately, the government—and the prices at the supermarket—don’t make the list.

This year, Americans will spend more money on Thanksgiving dinner than any time in U.S. history.

The price has been creeping up for years… and a new survey shows, the cost keeps climbing.

The American Farm Bureau Federation has “volunteer shoppers” go to the store to pick up all the fixings necessary for a traditional Thanksgiving feast: turkey, stuffing, sweet potatoes, rolls with butter, peas, cranberries, a vegetable tray, pumpkin pie with whipped cream, coffee, and milk.

That’s a nice meal—but not an extravagant or gourmet meal…and the once-a-year celebration used to be within every family’s budget.

The average family in 2022 will spend $64.05 for a Thanksgiving meal for 10 people, according to the American Farm Bureau Federation’s 37th annual survey.

That a 20 percent increase from last year, or $10.74 more than they paid in the checkout line last November.

Almost everything on the plate costs more — including the plate.

The cost of turkey alone rose 73 percent this year, caused in part by an avian flu epimedic that infected 47 million fowls.

Joe Biden’s war on fossil fuels shows up on your holiday grocery bill, as well. “High energy prices drive up the costs to farmers for a key agricultural input—namely, fertilizer,” regulatory expert Daren Bakst of the Heritage Foundation testified before Pennsylvania lawmakers earlier this year.

Unfortunately, high prices are not just a holiday cost that will vanish like the best sales on Black Friday morning. They represent a systemic inflationary roller coaster ride that’s only going up, all year long.

Groceries for all home meals cost 13 percent more this year than they did last year, according to the U.S. Department of Agriculture. Eating out also rose almost nine percent.

“Inflation will be squeezing your wallet this Thanksgiving, thanks to President Biden’s out of control spending,” said Senator Marsha Blackburn, R-Tenn. “The only way to fix this mess is to reverse course: stop the spending, unleash American energy, and put power back in the hands of the American people where it belongs.”

High prices hit everyone, because everyone eats—but they hit the poor and people on a fixed income the hardest. “For lower-income Americans, this situation is particularly troubling. Skyrocketing food prices are regressive and particularly damaging to them,” said Bakst.

One of the people getting squeezed is 70-year-old Barbara Smith of Tampa, who says she now relies on a free lunch given out by a local soup kitchen, Trinity Cafe. “Then I don’t have to go and purchase it, because I don’t have the money to do that,” she said.

Along with Christian charities, the big, bad capitalist system is stepping in to solve the problem that Joe Biden helped create. To fight high inflation, Walmart agreed to sell turkeys this year for the same price as last year. And discount grocer Aldi is going to sell everything you need to make a Thanksgiving meal for the amount they charged in 2019.

It’s a cheerful holiday gesture for them to take a loss on those items—but they shouldn’t have to. And so far, they’re doing so without any thanks from the president.

The same White House that bragged last Fourth of July that it saved American families 16 cents on its cookout can’t thank grocery chains for making sure their fellow citizens can have a dignified holiday meal at home. Biden is all about serving himself.

“With an unprecedented humanitarian crisis at our border, soaring gas prices, and more out of control spending that will cripple our future generations, the Biden Administration is bragging about saving us $0.04 on sliced cheese,” said Rep. Burgess Owens, R-Utah, last July.

Planning a cookout this year? Ketchup on the news. According to the Farm Bureau, the cost of a 4th of July BBQ is down from last year. It’s a fact you must-hear(d). Hot dog, the Biden economic plan is working. And that’s something we can all relish. pic.twitter.com/7h9qLauIbC

With an unprecedented humanitarian crisis at our border, soaring gas prices, and more out of control spending that will cripple our future generations, the Biden Administration is bragging about saving us $0.04 on sliced cheese. https://t.co/L0cxWeHxlC

Now, 16 months after he bragged about shaving 16 cents off your Independence Day picnic, there’s still a humanitarian crisis at the border, high gas prices, and a heavier debt burden than ever before—but Biden can’t even claim to have reduced Thanksgiving costs.

That explains why you have a smaller turkey on your plate and a smaller slice of the American pie: The biggest turkey is in the Oval Office.