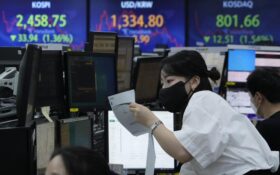 “The Fed is still feeling inflation. Its actions have not even begun to dent inflationary pressures at all,” said Clifford Bennett of ACY Securities in a report. “Nor have they begun to crimp economic activity at all. The economic slowdown was already in play for other reasons.”

On Wall Street, the future for the benchmark S&P 500 index was off 0.6% and that for the Dow Jones Industrial Average lost 0.5%.

In Asia, the Shanghai Composite Index rose 0.6% to 3,275.93 after the People’s Bank of China lowered its Loan Prime Rate, a target for market interest rates, for a five-year loan to shore up weak housing sales.

The ruling Communist Party is trying to revive economic growth after crackdown on debt caused a slump in real estate sales and Shanghai and other industrial cities shut down for weeks starting in late March to fight virus outbreaks.

The move “reflects the seriousness” of the real estate slump and shows Beijing is “willing to take more forceful actions,” said David Chao of Invesco in a report.

Chinese leaders are trying to revive economic growth without using across-the-board stimulus that might push up inflation or politically sensitive housing costs.

In energy markets, benchmark U.S. crude lost $1.52 to $88.92 per barrel in electronic trading on the New York Mercantile Exchange. Brent crude, the price basis for international trading, shed $1.55 to $95.17 per barrel in London.