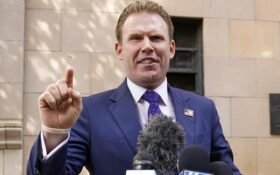 “Giuliani vs. Cuomo. Holy smokes. It’s Muhammad Ali vs. Joe Frazier,” the 35-year-old Giuliani said in an interview with the New York Post.

He also posted a video on Twitter, saying, “We’re looking forward to saving our state. We’re going to work our butts off and I’ll tell you what, we’re going to have a lot of fun doing it.”

Giuliani served as a White House aide under former President Donald Trump and has more recently been a commentator for the conservative network Newsmax. He has never run for public office.

He first came to public attention at Rudy Giuliani’s 1994 mayoral inauguration, when the 7-year-old Andrew mimicked his father’s gestures at the podium and repeated some of the words. The spotlight-stealing antics were lampooned by Chris Farley on “Saturday Night Live.”

Giuliani was recruited for the golf team at Duke University but sued the university in 2008, saying he had been improperly cut from the team. Duke said the cut was based on bullying behavior, which Giuliani denied. The lawsuit was dismissed in 2010.

Giuliani was present last month when federal agents raided his father’s Manhattan home as part of an investigation into the business dealings of the elder Giuliani during his time as Trump’s personal lawyer. The younger Giuliani told reporters the raids on his father’s home and office were “disgusting” and “absolutely absurd.”

Cuomo, who is facing allegations of sexual harassment and is being investigated for his administration’s handling of the deaths of nursing home residents from COVID-19, has not announced whether he is running for a fourth term.