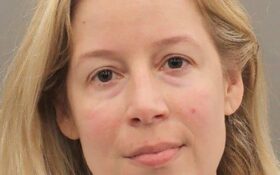 Prosecutors in Houston said Wednesday that the girlfriend of former Texas Lt. Gov. David Dewhurst was arrested on charges of injuring the longtime Republican officeholder in an alleged attack that broke two of his ribs.

Caron was booked on $10,000 bond. It was not immediately clear whether she had an attorney. Attempts to reach Dewhurst or his representatives were not immediately successful.

Dewhurst served 12 years as lieutenant before losing his bid for a fourth term in 2014. He also ran for U.S. Senate in 2012 but lost in a primary runoff to Ted Cruz.

Dewhurst was a powerful ally of Rick Perry, who was then the Texas governor. Together they pushed through a business-friendly agenda in the Legislature that they claimed drove a booming Texas economy, laying the groundwork for Perry’s failed campaigns for the White House.

Caron allegedly kicked Dewhurst on May 13 during an argument over him not calling a business partner, and allegedly scratched and bit him during another argument a few days later, according to prosecutors. McFaden said the charges might have been a misdemeanor if Dewhurst had been under the age of 65, but that the charges were elevated to a felony because of the age of the alleged victim.

Caron made accusations that Dewhurst had physically hurt her in the past but police could not substantiate those claims, said Dane Schiller, a spokesman for the district attorney’s office.

A court hearing was scheduled for Thursday.