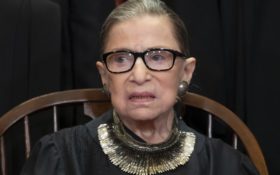 Supreme Court Justice Ruth Bader Ginsburg suggested Friday that there will be sharp divisions among her colleagues as they finish their term, with decisions in high-profile cases about the census and the drawing of electoral maps expected before the end of the month.

And expect the conservative half of the court to stand firm.

The justice was speaking at a conference for judges in New York. According to prepared remarks made available by the Supreme Court, the justice noted that of the 43 cases the justices have announced decisions in since hearing arguments beginning in October, just over a quarter were decided by a 5-4 or 5-3 vote. Those are rulings that tend to split the court’s five more conservative justices from its four liberal members including Ginsburg.

“Given the number of most watched cases still unannounced, I cannot predict that the relatively low sharp divisions ratio will hold,” said Ginsburg, who knows the votes in some two dozen cases remaining at this point, though the public does not. The court’s term runs from October through June.

In her remarks, Ginsburg drew a parallel between two cases involving the Trump administration: this year’s case involving the census and a case last year in which the court’s conservatives upheld President Donald Trump’s ban on travel from several mostly Muslim countries over the dissent of their liberal colleagues.

In the census case, which was argued in April, the court is being asked to uphold a decision by Commerce Secretary Wilbur Ross to ask every U.S. resident about citizenship in the 2020 census. Opponents of that plan say the question would discourage millions of Hispanics and immigrants from responding and being counted.

“Speculators about the outcome note that last year, in Trump v. Hawaii, the court upheld the so-called ‘travel ban,’ in an opinion granting great deference to the Executive. Respondents in the census case have argued that a ruling in Secretary Ross’s favor would stretch deference beyond the breaking point,” Ginsburg said.

Ginsburg also spoke briefly about cases in which the court is being asked to determine when electoral maps are too partisan. The court has two cases before it on that issue, one from Maryland and another from North Carolina.

“However one comes out on the legal issues, partisan gerrymandering unsettles the fundamental premise that people elect their representatives, not vice versa,” she said.

Ginsburg also noted one big difference between last year and this year, the absence of Justice Anthony Kennedy, who retired after the end of the last term. Kennedy, who often held the pivotal vote when the court divided 5-4, was replaced by Justice Brett Kavanaugh, whose appointment is expected to result in the court becoming more conservative.

“It was, I would say, the event of greatest consequence for the current term, and perhaps for many terms ahead,” Ginsburg said of Kennedy’s retirement.

Ginsburg, who became the court’s second female justice when she joined the court in 1993, also used the speech to note a number of statistics. She said that about one in five attorneys who argue before the court is female. And she credited Kavanaugh with making history “by bringing on board an all-female law clerk crew.”

“Thanks to his selections, the court has this term for the first time ever, more women than men serving as law clerks,” she said.

Monday is the next day for opinions to be announced by the court.