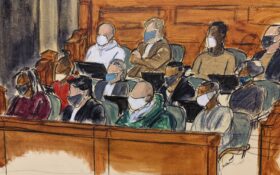 Ghislaine Maxwell will spend Christmas — and her 60th birthday — in jail without a resolution to her sex trafficking trial as a jury ended an abbreviated first week of deliberations Wednesday without reaching a verdict.

The jury finished a second full day of considering the British socialite’s fate on charges alleging that she recruited and groomed teenage girls for financier Jeffrey Epstein to sexually abuse over a 10-year period from 1994 to 2004. Jurors will return Monday, after the Christmas holiday, turning down an offer to work Thursday.

As they broke at 4:30 p.m., U.S. District Judge Alison J. Nathan warned jurors to protect themselves against the coronavirus over the next four days amid a dramatic increase in infections in New York City. Nathan said the Manhattan federal courthouse where they meet will be under stricter protocols when they reconvene and jurors must wear hospital-grade masks, which will be handed out.

“I need you all here and healthy on Monday,” she said.

More than 89,000 people in New York City have tested positive for the virus in the seven-day period that ended Tuesday.

Near day’s end, jurors asked to see the transcripts of the testimonies of one accuser, Kate, and former Epstein housekeeper Juan Patricio Alessi. Alessi testified that when he worked at Epstein’s sprawling Florida home from 1990 to 2002, he saw “many, many, many” female visitors, appearing to be in their late 20s, often lounging topless by the pool. He also testified that two accusers, underage teens at the time, were repeat visitors to the Epstein mansion.

Jurors had requested the transcripts of the other three accusers’ testimonies Tuesday, the first full day of deliberations. Jurors met for less than an hour Monday after closing arguments and instructions consumed most of the day.

Maxwell, 59 until Saturday, was arrested in July 2020 and has remained behind bars without bail ever since. Prosecutors say she groomed girls as young as 14 to think it was acceptable and normal for them to engage in sexualized massages with Epstein, her onetime boyfriend and eventual close friend and employer, sometimes in return for $100 bills.

For two weeks, prosecutors aimed to prove through two dozen witnesses and exhibits that Maxwell was Epstein’s crucial enabler. Prosecutors say she sometimes joined in the abuse after recruiting girls with promises that Epstein’s wealth and powerful connections could fund and enable their dreams. Often, the girls came from financially strapped families living in desperate or strained circumstances, the government said.

Defense lawyers contend that Maxwell is being prosecuted as a scapegoat after sex trafficking charges brought against Epstein dissolved with his 2019 suicide in a Manhattan federal jail as he awaited trial.