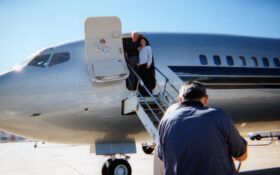 Convicted sex offender Jeffery Epstein had been rubbing elbows with global elites like Prince Andrew and former President Bill Clinton for decades until his 2019 charge for child sex trafficking — and Epstein did so with impunity thanks, in part, to the help of his mistress Ghislaine Maxwell.

After years of speculation, Maxwell has finally started to dish on Clinton and Andrew.

But she’s not naming names and confessing to crimes.

Instead, in an upcoming documentary Maxwell complained that she feels “so bad” they were caught up in the Epstein scandal.

“It was a special friendship, which continued over the years,” Maxwell told director Daphne Barak about her relationship with Clinton.

“We had lots in common,” she said. ” I feel bad that he is another victim, only because of his association with Jeffrey.”

“I understand that he, like others, can no longer consider me as a friend,” Maxwell said, according to a report by The Sun.

Maxwell also said she understands why Prince Andrew has distanced himself following her conviction. Maxwell is serving a 20-year prison sentence for her part in a global conspiracy that involved the sex trafficking of young girls.

“I accept that this friendship could not survive my conviction,” she said about her relationship with Andrew. “He is paying such a price for the association.”

“I consider him a dear friend,” Maxwell said. “I care about him.”

Maxwell also mentioned former President Donald Trump, and said she was glad he remembered her from their mutual social circles in New York City.

“We knew each other and mingled in the same circles, in New York, Palm Beach. I was very grateful when he wished me well after [being arrested],” Maxwell claimed. “He got bad media for it, but he dared, while others didn’t.

“I was honored he remembered me,” she said. “He is known to say what he thinks. It gave me a big boost.”

Spokesman for both Clinton and Prince Andrew have frequently insisted the two men were both unaware that Epstein was trafficking young women, even on the planes they shared with him.