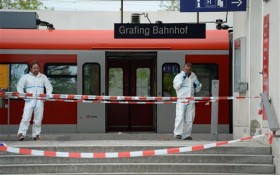 A German man yelled “infidel, you must die” and “Allahu akbar” as he stabbed one person to death and wounded three others at a Bavarian train station Tuesday, but authorities said they’ve found no links to any Islamic extremist network.

The 27-year-old, who had previously been in psychiatric care, made a “rather confused impression” as he was questioned by investigators, authorities said.

He had a 10-centimeter (4-inch) survival knife tucked into his belt when he was caught at about 5 a.m. near the scene of the attack by the Grafing Bahnhof station, near Munich, they said.

One man died in a hospital after the apparently random attack and three other men were being treated for their wounds.

The suspect’s name wasn’t released in line with German privacy laws, but authorities said he is a German citizen with a traditional German name.

The man, a former carpenter who had been unemployed for two years, admitted to the crime, said Ken Heidenreich, spokesman for the Munich prosecutor’s office in charge of the case.

But Heidenreich said that there were questions about whether the man can be held criminally responsible and that authorities were evaluating whether he should be taken to a mental hospital.

Senior police official Lothar Koehler said the suspect told them he had been taking drugs, and that around the time of the attack he took his shoes off because “he felt bugs on his feet that had caused blisters and were generating intense heat.”

Koehler added it wasn’t immediately clear whether the suspect was under the influence of drugs at the time of the attack, and authorities have found no record of any previous narcotics cases against him.

A woman reported hearing the words “infidel, you must die” as the attack began, and the suspect himself admitted yelling “Allahu akbar,” Arabic for “God is great,” senior police official Guenther Gietl said.

Koehler said it was “difficult to get coherent, plausible and comprehensible information” during questioning of the suspect.

Investigators said there were no indications that the man had any accomplices or an extremist background.

There are “no indications from intelligence services so far that this person had any links in any form to Islamist or Salafist groups, people or organizations,” Koehler said. “We also have no indications that there was any radicalization or perhaps trigger for this act as a result of the consumption of (extremist) videos.”

Koehler said investigators will follow up on statements the suspect made in questioning to determine whether he might have converted to Islam. But, he added, “it has been difficult so far to get sensible statements out of him on this. And if he did, it must have been relatively recent.”

He said the man underwent psychiatric care on Sunday night, though he didn’t give details.

Authorities said the suspect lived near the central city of Giessen, in the state of Hesse. It wasn’t clear why he traveled by train to Munich on Monday evening, but investigators said he may have had plans to go to either Austria or Portugal.

The man didn’t have enough cash to pay for a hotel in Munich Monday night. He hung around the main station for a while, but told police that he had then “felt unwell” and boarded a train to Grafing, around 30 kilometers (nearly 20 miles) to the east. Surveillance camera footage showed that he was there about three hours before the attack, Koehler said.

The 56-year-old victim who died was attacked on or near the train, as was a second victim. The two others were attacked outside the station.

The names of the victims weren’t released. One of the survivors had serious injuries, though it wasn’t clear whether they were life-threatening.

At the scene, police forensic experts marked dozens of bloody footprints — some of them barefoot — on the train platform with chalk numbers and collected evidence, including a cellphone.

Angelika Obermayr, the mayor of Grafing, which has about 13,500 residents, described it as “an absolutely peaceful little Bavarian town.”

“Something like this is absolutely new and shakes people deeply — otherwise, they only know this kind of thing from television,” she said.

The attack comes at a sensitive time in Germany after the influx of around 1.1 million migrants last year and growing concerns about how the country will deal with them, particularly in Bavaria, their usual state of entry.

Germany so far has been spared the kind of multiple-victim Islamic extremist attacks other European countries have suffered.