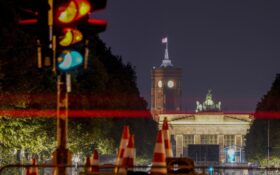 Germany is embarking on a potentially lengthy search for its next government after the center-left Social Democrats narrowly beat outgoing Chancellor Angela Merkel’s center-right bloc in an election that failed to set a clear direction for Europe’s biggest economy under a new leader.

Leaders of the parties in the newly elected parliament were meeting Monday to digest a result that saw Merkel’s Union bloc slump to its worst-ever result in a national election, and appeared to put the keys to power in the hands of two opposition parties.

Both Social Democrat Olaf Scholz, who pulled his party out of a years-long slump, and Armin Laschet, the candidate of Merkel’s party who saw his party’s fortunes decline in a troubled campaign, laid a claim to leading the next government. Scholz is the outgoing vice chancellor and finance minister and Laschet is the governor of Germany’s most populous state, North Rhine-Westphalia.

Whichever of them becomes chancellor will do so with his party having won a smaller share of the vote than any of his predecessors. Who gets the job looks likely to depend on the decision of the prospective junior partners, the environmentalist Greens and the business-friendly Free Democrats — parties that traditionally belong to rival ideological camps.

“Voters have spoken very clearly,” Scholz said Monday. “They strengthened three parties — the Social Democrats, the Greens and the Free Democrats — so this is the visible mandate the citizens of this country have given: these three parties should lead the next government.”

The only other option that would have a parliamentary majority is a repeat of the “grand coalition” of the Union and Social Democrats. That is the grouping that has run Germany for 12 years of Merkel’s 16-year tenure and has often been marred by squabbling, but this time it would be under Scholz’s leadership with Merkel’s bloc as junior partner. There is little appetite for that, however.

Scholz said the Union “received the message from citizens that they should no longer be in government, but go into opposition.”

Merkel’s outgoing government will remain in office until a successor is sworn in, a process that can take weeks or months. Merkel announced in 2018 that she wouldn’t seek a fifth term.

The Greens traditionally lean toward the Social Democrats and the Free Democrats toward the Union, but neither ruled out going the other way on Sunday night. The Greens made significant gains in the election to finish third but fell far short of their original aim of taking the chancellery, while the Free Democrats improved slightly on a good result from 2017.

Julia Reuschenbach, a political analyst at the University of Bonn, told ARD television that a Laschet-led government “isn’t excluded in principle,” though the Social Democrats will push the argument that the result shows Germans want them to lead the new administration. “Ultimately, the parties will of course have to agree on matters of substance,” she said.

Final official results gave the Social Democrats 25.7% of the vote and the Union 24.1%. Four years ago, they won 20.5% and 32.9% respectively. The Union — made up of Laschet’s Christian Democratic Union and its Bavarian sister, the Christian Social Union — had never previously polled below 31% in a national parliamentary election.

The new Bundestag, or lower house of parliament, will have a record 735 lawmakers. The parliament varies in size because of a peculiarity of Germany’s electoral system, which means that it can be considerably bigger than the minimum 598 seats.

The Social Democrats took 206 seats, the Union 196, the Greens 118, the Free Democrats 92, Alternative for Germany 83 and the Left Party 39. One seat went to the Danish minority party SSW, which will be represented for the first time in decades.