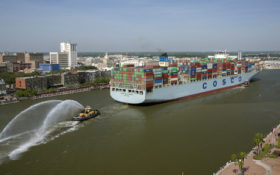 A shipment of reprocessed nuclear waste arrived Monday at a port in northern Germany, and authorities were braced for likely protests as it is transported across the country to a storage site.

A ship carrying six containers of waste from the Sellafield reprocessing plant in England docked in the early morning in Nordenham, news agency dpa reported. From there, it is to be transported by train to the now-closed Biblis nuclear power plant south of Frankfurt, several hundred kilometers (miles) away.

Germany has a strong anti-nuclear movement and waste transports have often drawn large protests. Activists question the safety of the waste containers and storage sites.

Following the Fukushima nuclear disaster in Japan nine years ago, Germany decided to phase out its own nuclear power generation by the end of 2022. The Biblis plant is one of several that was taken offline in 2011, but the site remains in use as a provisional storage facility for nuclear waste.

Germany recently launched a new search for a permanent site to store its most radioactive waste. A final decision is slated for 2031 and the aim is to start using the selected site in 2050.