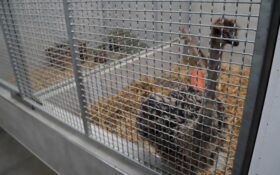 Is anyone missing an ostrich?

An animal shelter says it is looking for the owner of an ostrich chick that was found in the German town of Krefeld late Friday.

A vet found the 4-to-5-month-old chick to be in good health, dpa reported.

Krefeld Zoo said the bird wasn’t one of theirs.