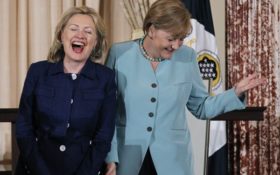 Could this be the end of German Chancellor Angela Merkel’s political career? Some policy experts think the end could be near. After bitter infighting over immigration left her government in ruins, the clock may have run out on the open borders advocate.

The point of contention comes between Merkel and Interior Minister Horst Seehofer, who has been a long-time critic of Merkel’s open border policy that grants asylum to any refugee who shows up on the border.

Seehofer is the leader of the Bavarian Christian Social Union, the political ally to Merkel’s Christian Democratic Union. These parties rule the country in a coalition – which means infighting can result in a complete change of leadership.

Merkel, who has been the German Chancellor since 2005, has rejected Seehofer’s plan to turn away refugees from the German border if they have already been registered in another EU country – but he intends to implement it anyway.

Seehofer has given Merkel just two weeks to come up with a plan that will satisfy his party, and if she doesn’t, she will likely be replaced as Chancellor.

President Donald Trump has added pressure to the situation by calling out Merkel’s policies that have resulted in violent crimes, such as the rape and murder of a German teenager by asylum seeking migrant.

The people of Germany are turning against their leadership as migration is rocking the already tenuous Berlin coalition. Crime in Germany is way up. Big mistake made all over Europe in allowing millions of people in who have so strongly and violently changed their culture!

It is hard to understand why Merkel refuses to tighten Germany’s border as it is suggested that most Germans support tighter border regulations.

If she can’t clean up her mess in the next two weeks, it’s bye-bye Angie!