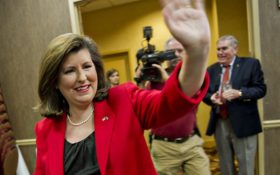 It’s the most expensive House race in U.S. history and it has the undivided attention of “Never Trump” establishment politicians. Tuesday, the race heads to voters in the northern suburbs of Atlanta.

Either Republican Karen Handel will claim a seat that’s been in her party’s hands since 1979 — or Democrat Jon Ossoff will manage an upset that will rattle Washington ahead of the 2018 midterm elections.

Their matchup in Georgia’s 6th Congressional District has become a proxy for the national political atmosphere and a test of GOP strength early in Trump’s presidency.

Here are five things worth knowing about the race:

Ossoff is a 30-year-old former congressional staffer turned documentary filmmaker. He doesn’t live in the district, and failed to vote in the 2012 presidential election. Making his first bid for office, he’s become a symbol of the Trump opposition movement. Yet he can’t even vote for himself.

Ossoff barely mentions the president and doesn’t constantly refer to Handel, a former Georgia secretary of state, directly either, instead pitching his “fresh leadership” against “career politicians.”

Handel, 55, embraces her experience as a statewide and local elected official. “You know me,” she says, adding often that Ossoff has “no record” and “inflates his resume.”

She’s also known as a Susan G. Komen Foundation executive when the organization in 2012 sought to cut off its support of Planned Parenthood, which provides abortions.

The Georgia 6th is an affluent and well-educated district that has elected Newt Gingrich, the former speaker; Johnny Isakson, now Georgia’s senior U.S. senator; and most recently Tom Price, who resigned in February to join the administration.

But even with that past, things have changed recently. Trump barely edged failed Democratic presidential candidate Hillary Clinton in November, giving Ossoff his opening once Price was confirmed. Ossoff hopes to maximize the district’s Democratic base and pick up just enough independents and pro-establishment Republicans who don’t align with Trump.

Even a Trump Cabinet member and former Georgia governor, Agriculture Secretary Sonny Perdue, acknowledged the conundrum at a recent Handel rally, saying “some Republicans” in the district have turned against the president.

But that hasn’t stopped from Trump from weighing in on the race. In one early Tuesday tweet, Trump said —

Democrat Jon Ossoff, who wants to raise your taxes to the highest level and is weak on crime and security, doesn't even live in district.

In another tweet, Trump praised Handel as a hard worker who will fight for working people —

KAREN HANDEL FOR CONGRESS. She will fight for lower taxes, great healthcare strong security-a hard worker who will never give up! VOTE TODAY

Ossoff raised more than $23 million, most from outside Georgia. Handel notes that many of those people live in Democratic-leaning states like California, New York and Massachusetts.

Handel has raised less than a quarter of Ossoff’s haul.

Not the huge haul Ossoff has had — but nothing small, either.

Democrats have plenty of energy to riot on the streets, but it hasn’t translated to the electoral scoreboard.

The party needs to flip at least 24 GOP-held seats by next November to reclaim a House majority.

Party insiders say Georgia is not a must-win given the GOP advantages here, but winning in a district like this could put them on their way to a successful 2018, and it would embolden donors and volunteers nationally – and potentially boost candidate recruiting in friendlier districts.

Losing would raise questions about whether Democrats can turn violent protests into votes.

For Republicans, it’s about defense, with a healthy dose of fear.

Winning in this once-safe GOP district would follow House special election victories this year in GOP-held districts in Kansas and Montana. Republicans are favored to hold a fourth seat up Tuesday in South Carolina, while Democrats already held their lone open seat in a California special election.

But if Handel loses, it will be a clear warning sign to establishment Republicans facing tough races in other suburban districts across the country, many of them among the 23 GOP-held seats where Trump trailed Clinton in 2016.

A political action committee unveiled a last-minute ad trying to link Ossoff to the shooting of a Republican House leader and others at a GOP congressional baseball team practice last week outside Washington.

The ad blames the “violent left” for the shooting and suggests such acts would continue if Ossoff wins.