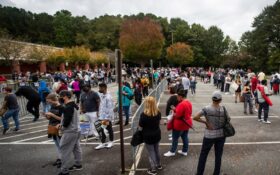 More than 128,000 Georgians went to the polls Monday, a record for the first day of early voting in the state, according to the secretary of state’s office.

The high turnout saw eager voters waiting in hours-long lines across the state to cast their ballots. Election officials and advocacy groups have been pushing people to vote early, either in person or by absentee ballot, in anticipation of record turnout and concerns about coronavirus exposure.

But some would-be voters turned up Monday only to find their county offices closed for the Columbus Day holiday. Effingham County resident Tony Grimes told WTOC-TV he took the day off work to vote and was frustrated to find the door locked at the county’s main elections office.

“I see in Chatham County where they’re having lines forming for them to go and vote,” he told the television station. “So, they’re voting right now, and we aren’t able to.”

It was not immediately clear how many counties observed the holiday resulting in a one-day delay to the start of early voting.

People can continue to vote early in person through Oct. 30. While voters must vote at their assigned polling place on Election Day, they can vote at any open polling place in the county where they live during early voting.